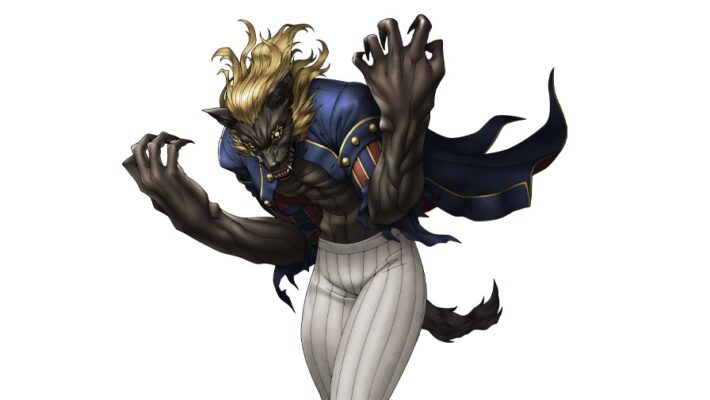 The latest Shin Megami Tensei V demon commentary from character and demon designer Masayuki Doi, posted on Atlus’s official Twitter account, focuses on Loup-Garou. He’s a werewolf from France and, in this interpretation, was a tyrannical warlord punished with his current form. He’s under the Beast classification and has a unique electric-based skill called Souffle d’éclair, which means Lightning Breath.

Doi outlines his design choices in the Shin Megami Tensei V Loup-Garou commentary, which involves a blend of French aristocracy combined with the French flag that contrasts his feral nature as a werewolf. Even his animations and dialogue reflect this duality. For instance, when he’s more human, his speech is refined and peppered with French and he carries himself upright with grace and nobility. But when his wolf side is in control, he becomes far more feral in nature with his speech pattern becoming rougher and even walking on all fours.

As a side note, the animation for his Souffle d’éclair skill is an exaggerated pulled-back motion that also emphasizes his beastly nature. You can check out the tweet for the full commentary below:

The previously released Shin Megami Tensei V commentary discussed the plot important Abdiel, who is the leader of Bethel’s law forces and an archangel from the novel Paradise Lost. Meanwhile, the September 14, 2021 daily demon trailers cover both Hua Po and Ame no Uzume.

Shin Megami Tensei V will come to the Nintendo Switch in Japan on November 11, 2021 and worldwide on November 12, 2021