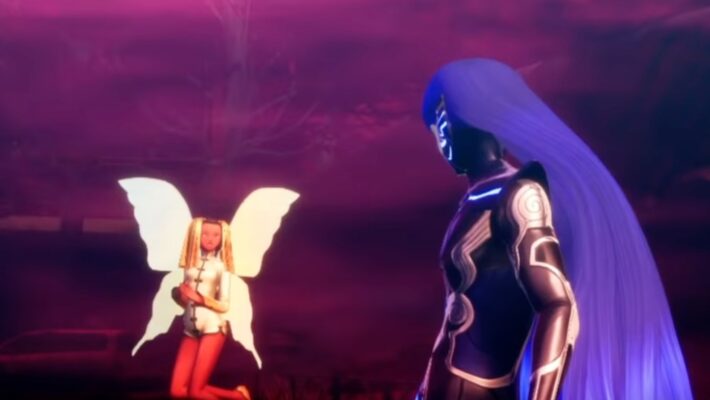 The next two Shin Megami Tensei V demon digest videos are here, and they look at the returning characters Hua Po and Ame no Uzume. Both are series veterans who have appeared in multiple installments, like the recent SMT III Nocturne HD Remaster. They showed up in spin-offs as well.

First, Ame no Uzume appeared as the 92nd Shin Megami Tensei V demon. First, she used Tarukaja+2 to increase everyone’s attack. After that, she unleashed Mazio+2 against two Ippon-Dataras. The last attack she performed is Hama+2 when facing a group of Succubus demons.

Next, here’s the Hua Po Shin Megami Tensei V trailer. She first used Agilao+2 against some Jack Frosts in it. She also performed Media+1 to heal the party.

We also know one of the two characters who will show up tomorrow. The teaser for Hua Po shows the last Moirae Sister. Clotho will appear on September 15, 2021. You can see her holding the thread in her silhouette.

As usual, we’ve come to the point of the Shin Megami Tensei V demon digest roundup that looks at videos that came before the ones for Hua Po and Ame no Uzume. Over 214 will appear to show off all characters in the game. Here are the last 20 released so far.