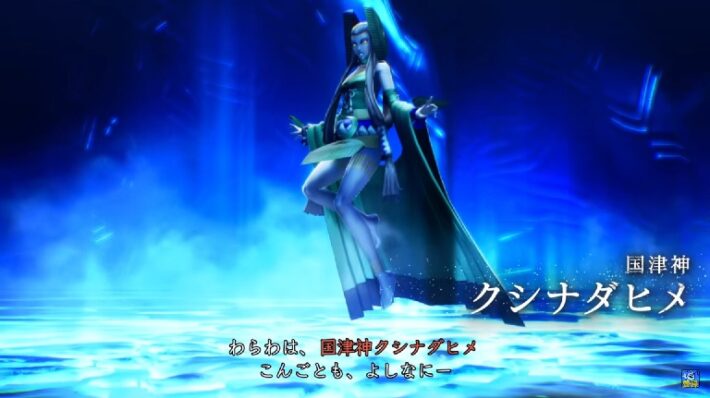 Today’s daily demon digest for Shin Megami Tensei V looks at Kushinada-Hime, which is a recurring demon in the series. She will appear as a member of the Kunitsu race and hails from Japanese mythology. In legend, she is one of Susanoo’s wives after he slays Yamata no Orochi. Like previous iterations of Kushinada-Hime, the one in Shin Megami Tensei V will excel as a support character.

The combs that appear in Kushinada-Hime’s design refer to the word “kushi” in her name. The Japanese word for “comb” is “kushi,” and she has retained this look for the majority of her appearances in the Shin Megami Tensei series. In the video, after her introduction, Kushinada-Hime shows off her myriad of support spells. She raises the party’s defense with Marakukaja before healing the party with Medirama. She’s not completely powerless though. At the end of the trailer, she dispatches of a group of Manananggal with a Mahamaon. The video ends with a silhouette of Bugbear.

You can watch Kushinada-Hime’s video below.

Shin Megami Tensei V will launch on the Nintendo Switch in Japan on November 11 and worldwide on November 12, 2021.