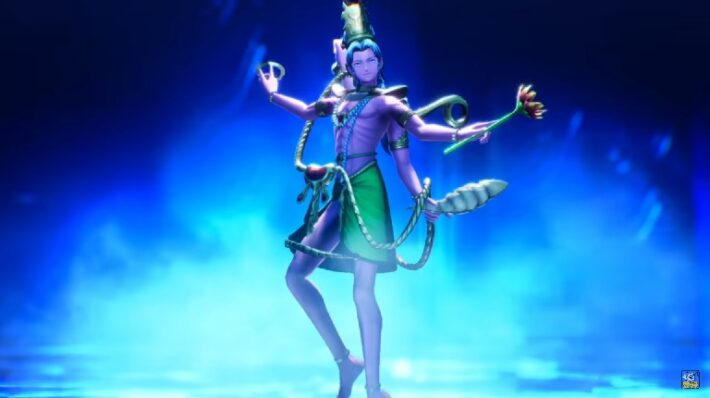 Today’s daily demon digest video for Shin Megami Tensei V focused on Vishnu, who is one of the principal deities of Hinduism. Vishnu is the being who creates, protects, and transforms the universe. In this game, Vishnu is a member of the Deity race. The mythological Vishnu can create Avatars such as Rama to protect the Earth when there is trouble.

In the video, as one might expect from the parent of the universe, Vishnu starts off with a more supportive role. He casts a Mediarahan to cure the Nahobino and the rest of the party. However, his purpose in the party isn’t just to heal or buff. In Shin Megami Tensei V, Vishnu can also use Mahamabarion, which is a severe Light skill that can instantly kill enemies weak to the element. Conversely, he can also use Mahamudobarion, which is the Dark version of Mahambarion. For tomorrow, the silhouette shows a winged figure that resembles Gabriel.

Vishnu marks the 67th demon that Atlus has introduced for Shin Megami Tensei V. Here are the previous twenty that the company showcased:

Shin Megami Tensei V will arrive on the Nintendo Switch for Japan on November 11, and worldwide on November 12, 2021.