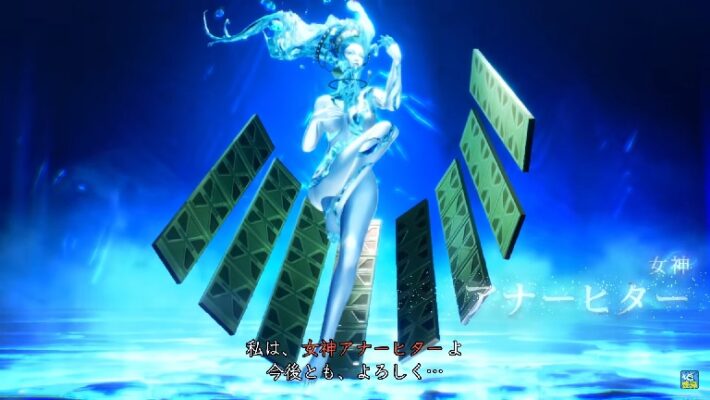 Today’s Shin Megami Tensei V daily demon digest graces us with the presence of Anahita, a goddess from Zoroastrianism and Persian mythology. She is the goddess of water, which then associates her with the ideas of fertility, wisdom, and healing. In Shin Megami Tensei V, she is a member of the Megami tribe.

Anahita has appeared in previous works from the Shin Megami Tensei series, such as in Shin Megami Tensei: Strange Journey Redux. Despite her water association and conflation with Ishtar, Anahita has a much more aggressive personality. In the video, she claims that she loves to fight and that she will grant the protagonist’s wish should he best her in battle.

In the video, she shows off her ability, Hell Splash +4. She sends out a wave of water which then freezes, encasing her opponents in icicles that then shatter. Despite its name, Hell Splash is an ice-based attack and it can target multiple enemies. Tomorrow, Atlus will show off a Holy Beast that, judging by its silhouette, will be rather small and cute.

Anahita is the 48th demon that Atlus has showcased for Shin Megami Tensei V. In total, Atlus will show off 214 videos in this series. Previous daily demon digests include:

Shin Megami Tensei V will come out on the Nintendo Switch on November 11, 2021 for Japanese audiences and on November 12, 2021 worldwide.