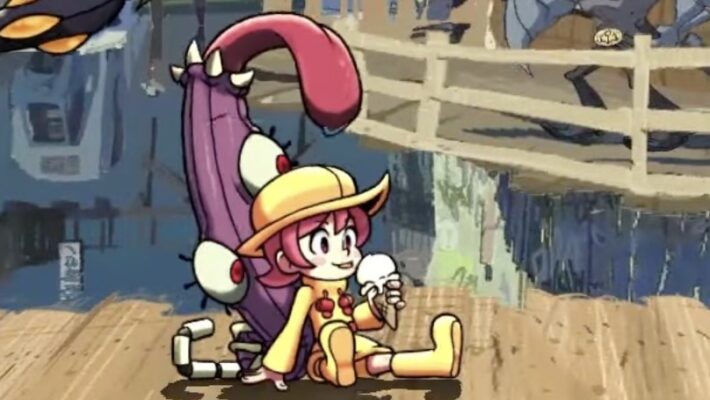 We now have a better idea what Umbrella will look like when she comes to Skullgirls 2nd Encore and Skullgirls Mobile. Hidden Variable, Future Club, and Autumn Games shared a brief teaser of the next fighter. While short and not entirely complete, we get to see her attack and enjoy some ice cream. It also confirms that Skullgirls 2nd Encore PC owners with Season Pass 1 will get to use an alpha version of her ahead of her full debut.

Umbrella is Parasoul’s younger sister. Which is why Parasoul also shows up in her teaser trailer. She carries and fights with Hungern, a living weapon that resembles an umbrella. While at one point she was considered as a possible candidate for the main roster, she since ended up being pushed back both in campaigns and later until finally showing up as a future addition for both the console and mobile games.

Here’s a closer look at Umbrella in Skullgirls 2nd Encore. The video begins with her sister being beaten up by Squigly. Parasoul calls for Umbrella, and she begins to fight back. Since she is an in-progress character, there are some points at which her art isn’t completely colored in.

Skullgirls 2nd Encore is available on the Nintendo Switch, PlayStation 4, PlayStation Vita, Xbox One, and PC. Skullgirls Mobile is available on Android and Apple iOS devices. While there’s no release date for Umbrella yet, the teaser says an alpha version of her is coming “soon” for Steam Season Pass 1 owners. (Her initial reveal mentioned a Q4 2021 release.) The Season 1 Pass is $34.99 and includes Annie of the Stars, Umbrella, two other characters, and exclusive palettes for other characters.