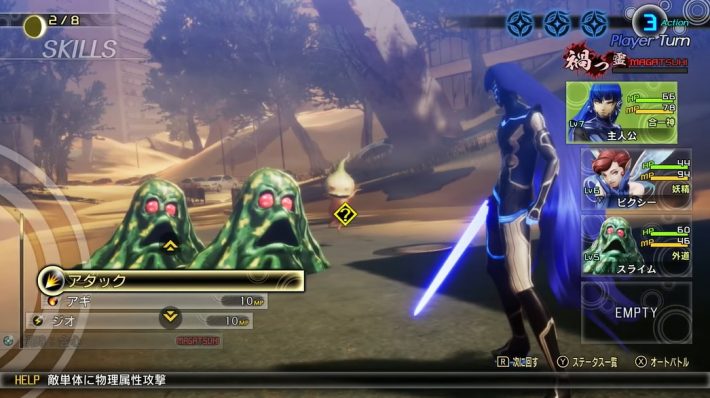 During the E3 2021 Nintendo Treehouse Live, one segment looked at Shin Megami Tensei V. To be more specific, it looked at some features returning from past installments. The gameplay specifically looked at battles, showing off the return of the press turn mechanic, Magatsushi, stat growth, and demon negotiation. We also got a better look at the main character, who fused with an unknown being after arriving in this other world.

The segment featured talking and battling. At some points, there were chances to talk to other demons in the field. They explained that 18 years ago, there was a battle between angels and demons. However, the demons talked to didn’t seem to know who won. However, they did confirm that humans did once live in this Netherworld.

As far as battles went, people from Nintendo played through a part of SMT V with a Pixie and Slime at their side. Swinging a sword allows a person to take initiative in a fight. (Though if a demon wants to negotiate, this will override the initiative.)

While engaging in random battles, some of the supplemental mechanics came up. For example, Magatsushi skills showed up. The Press Turn mechanic, which lets you exploit enemies’ weaknesses in SMT V to get extra turns when attacking, will be back. This can help by providing more chances to attack. If enemies use it, they can attack you more. Should you level up after a fight, you’ll earn stat points that can be put into strength, endurance, magic, agility, and luck.

Here’s the full SMT V Treehouse stream looking at the press turn mechanic, demon negotiation, and general battling. It ends with a fight against an intimidating foe.