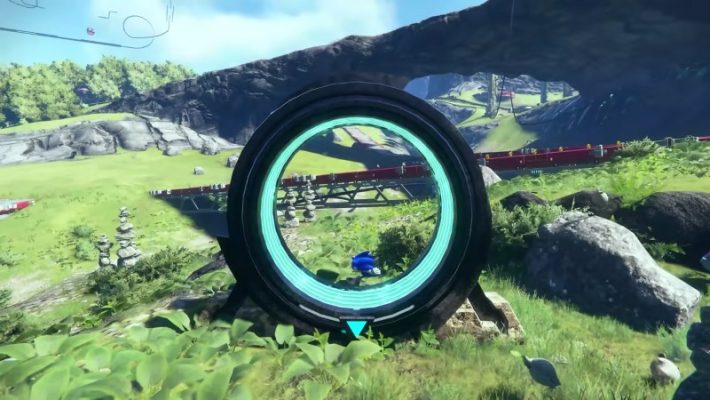 There’s a new look at Sonic Frontiers gameplay. Sega had IGN share a first peek at the game. This involved about seven minutes of Sonic the Hedgehog exploring the new open-world environment. [Thanks, IGN!]

The video officially starts at the 42 second mark. It shows Sonic approaching a tower. Various mechanisms like boost rings, boost pads, walls he can grapple or run along, and grind rails appear on it. All of these are designed to help him reach the summit. After he reaches the top, he heads down to solid ground again. Once he’s there, he runs along the landscape. People can see some roads and rails designed to act as bridges or help him reach various spaces. He also collects things like hearts and rings as he travels.

At the four minute mark, Sonic encounters a puzzle. He needs to turn some statues in order to open a door to another area. After that, another puzzle appears. This one involves running in circles around flames to reveal another mystery.

This is the longest look at Sonic Frontiers gameplay so far. The first reveal showed up during The Game Awards 2021. That only offered a quick glimpse at how Sonic will look in the game and hinted at the open-world nature. A teaser trailer also appeared ahead of IGN’s June 1, 2022 reveal.

While a lot of details are still to come, we do know some things about the title. Sega already revealed the game’s voice acting and subtitle languages.

Sonic Frontiers will appear on the Nintendo Switch, PlayStation 4, PlayStation 5, Xbox One, Xbox Series X, and PC during the 2022 holiday season.