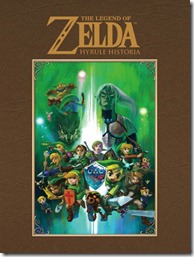 Excited for The Legend of Zelda: Hyrule Historia? You aren’t alone, it would seem. Publishers Weekly (via: ANN) report that the book has jumped to the top of Amazon USA’s best-sellers list in the “Books” category, based on pre-orders. This is despite the fact that the book won’t be available until January 2013.

The Legend of Zelda: Hyrule Historia will be published by Dark Horse in North America. The book will contain an in-depth explanation of The Legend of Zelda’s timeline, concept art from each of the games, an overview of Hyrule’s evolution, and more features spanning the entire series.