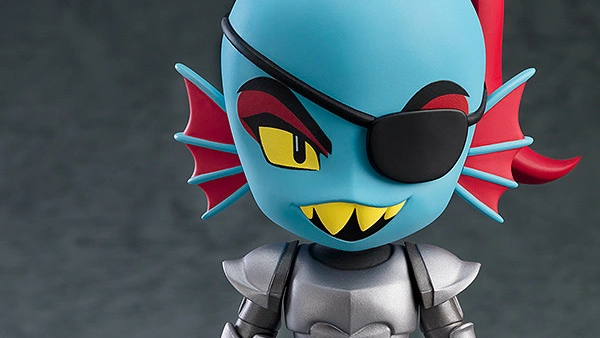 Good Smile Company has opened pre-orders for the Undertale Undyne Nendoroid. The Nendoroid comes with the character’s harpoon and a fish-shaped mug, as well as several faceplates. Pre-orders will close on September 28, 2022, and the Nendoroid will cost $39.99. It will ship sometime in May 2023.

Undyne is one of several main characters that appear in the 2D RPG Undertale. She is an anthropomorphic fish and the leader of the Royal Guard. She typically appears wearing a suit of plate armor and an eye patch. She also wields a harpoon.

Her Nendoroid recreates much of those same features. While it does not seem to include her plate armor helmet, she does come with several optional bonus items. It also appears that you can change the angle of the character’s ponytail. Additionally, pre-orders will include a special backdrop.

From "UNDERTALE" comes a Nendoroid of Undyne! Undyne's harpoon and fish-shaped mug are included as optional parts. Create the game's memorable water-drinking scene in Nendoroid form! Be sure to add her to your collection!

In addition to her two “standard” and “laughing” faceplates, Undyne can also hold her harpoon. Furthermore, it also comes with a holdable fish-shaped mug. The “memorable water-drinking scene” that Good Smile Company mentions is likely a reference to when the player can choose to give her a cup of water in the Hotlands.

The Undertale Undyne Nendoroid is available for pre-order on the Good Smile Company website. The Nendoroid will cost $39.99, and ship sometime in May 2023. Pre-orders will close on September 28, 2022.