Six years ago, in the time when Enix was its own entity, Valkyrie Profile was released for the PS1. The game became a cult hit among RPG fans since it was a completely different experience compared to any other RPG on the market. Even to this day there is nothing else like the Valkyrie Profile series, except well Valkyrie Profile. Since the game was released in very limited quantities prices for an English copy easily run for over a hundred dollars on eBay. That’s about to change since Square-Enix has a new version of Valkyrie Profile for the PSP. Valkyrie Profile: Lenneth has new CG cutscenes and brings the underground classic to a wide audience. 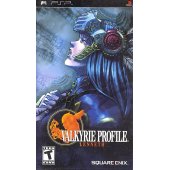 The world of Valkyrie Profile: Lenneth is heavily influenced by Norse mythology. Players step into the shoes of Lenneth, a Valkyrie serving under Odin the leader of Aesir. Odin is troubled by the forthcoming of Ragnarok, a sacred war between the Aesir and Vanir. To ensure that the Aesir win he sends Valkyrie to Midgard, the land of the mortals, to “recruit” soldiers for combat. When a person is near death Valkyrie can recruit their soul to join her side. Upon accepting Valkyrie’s request they become Einherjar, spirits that Valkyrie can train to become powerful warriors. While Valkyrie is searching for souls she has her own quest, to discover her identity.

Besides the lengthy introduction where Valkyrie gains her first allies, Arngrim a bloodthirsty warrior, Jelanda a princess who can wield magic and the fellow goddess Freya the game is completely open ended. While players can explore the world freely time is limited for Valkyrie to complete her task. Time is broken up into chapters and periods. Periods represent time spent on Midgard where Valkyrie enters a dungeon, visits a town or stops to rest and heal her fellow Einherjar. After 24 periods pass, a chapter ends and Odin requests Valkyrie to transfer one of her Einherjar to him. If the player decides to help the Aesir she can give up one of her party members, but if she does that party member is gone which can make life on Midgard more difficult. While the open ended gameplay is an excellent idea, players can easily get lost and have no idea where to go next. If that happens Valkyrie can use her spiritual concentration to seek out Einherjar or open up new dungeons. It costs two periods to do this, but it’s a better alternative than aimlessly exploring the same areas.

To train the Einherjar from broken souls to true heroes Valkyrie has to take them into dungeons and fight monsters that prey upon the living. Dungeons switch the game from a 3D world to a linear 2D map. In the 2D setting Valkyrie moves like a character would in a SNES era platformer game. She can jump (circle button), slide (down+circle) and slash enemies with her sword to get the first attack in combat. To climb to higher ground, Valkyrie can create ice blocks by pressing square and shooting ice crystals into a wall. Ice steps allow Valkyrie to find other hidden treasure and later on are required for progressing through dungeons. Players are often encouraged to explore dungeons as much as possible. By completing mini puzzles like pushing a statue in place or finishing events Valkyrie’s experience point orb will fill up. The orb can be used to quickly level up weak Einherjar to an average level or super charge your existing party members for combat.

Battles in Valkyrie Profile: Lenneth are just as unique as the gameplay. The system is turn based, but it isn’t a menu selection system like other RPGs. Each character is mapped to a different face button on the PSP. If you want Valkyrie to attack you can press square. While Valkyrie is prepping her sword swipe, players can press X to activate Arngrim’s attack and circle for Lucian. If everything is timed correctly, the trio will make a combo and do some extra damage. Combos fill up the special attack gauge and if that reaches 100 a single member can use their special attack for massive damage. Instead of focusing on tactics or knowing weaknesses, Valkyrie Profile: Lenneth is all about timing. While the system is novel at first it becomes repetitive after a dozen hours of play. Even when new characters are added, combat doesn’t change much since it still is based on button mashing. Fighting levels up all of the Einherjar and Valkyrie. On top of each hero’s absolute level they have a number of traits that can be strengthened so they are better suited warriors for Ragnarok.

Valkyrie Profile: Lenneth is a faithful port of the PS1 game with the addition of 16:9 support and some gorgeous CG scenes. Fans of the original might be a little disappointed with the lack of extras in Lenneth, but since the PS1 version was released in limited quantities that might not be too much of a problem. Even though the presentation is nearly six years old Valkyrie Profile: Lenneth looks fantastic on the PSP. The major problem with the PSP port is loading downtime. When the menu is called up there’s a second or two delay, entering a new area means another couple of seconds of waiting and there is always an unwanted break before combat. Also Valkyrie Profile: Lenneth doesn’t have many save points during dungeons. This can be another minor problem if you’re planning to play the game in short bursts.

Even with these flaws Valkyrie Profile: Lenneth is an engaging game. The dark tale of life beyond death is a change from heroic RPG stories of saving the world. The 2D dungeons and clever fighting system keeps the gameplay fresh too. These changes are sure to please the hardcore RPG audience, but at the same time the complexity of Valkyrie Profile: Lenneth is bound to turn off casual gamers.

Square-Enix localized this game in English, so if you pick up the North American release there should be no importing problems.

+ Pros: The brilliant blend of platforming gameplay with an RPG battle system make Valkyrie Profile: Lenneth like nothing else on the market.

– Cons: If you’re one of the few people who own the original there isn’t too much “new” in Lenneth besides CG movies and occasionally frustrating load times.