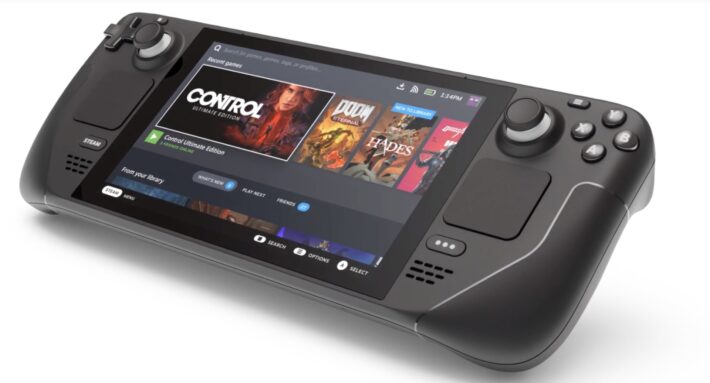 Valve announced it will have a Nintendo Switch-like device for playing Steam games on the go known as the Steam Deck. There will be three bundles available. All of them are expected to ship in December 2021. Pre-orders will open on July 16, 2021.  The Steam Deck is essentially an on-the-go computer. It has a 7” touchscreen, like a Nintendo Switch. A D-pad, two analog sticks, two track pads, and ABXY inputs. There are L1, L2, R1, and R2 triggers. R4, R5, L4, and L5 buttons are on the back of the unit. People also have a built-in mic, headphone jack, type-C port, and a microSD slot for additional memory. It has an AMD APU processor, 16GB ram, and can have between 64GB and 512GB storage built into it. There are HD haptics and 6-axis gyro controls too. Bluetooth and WiFI support are included. Its battery will last between two and eight hours. It uses SteamOS.

As it is a Steam device, expected features will be there. It will connect to your account to run SteamOS games you already own. You can use Remote Play to stream games and take advantage of cloud saves. Steam Chat is available too.

The base model will be $399 for the 64GB device. It will come with a carrying case. The next step up is the 256GB $529 mode, which includes a Steam Community Profile Bundle. Finally, the 512GB model will come with anti-glare etched glass, the case, the profile bundle, and a virtual keyboard theme.