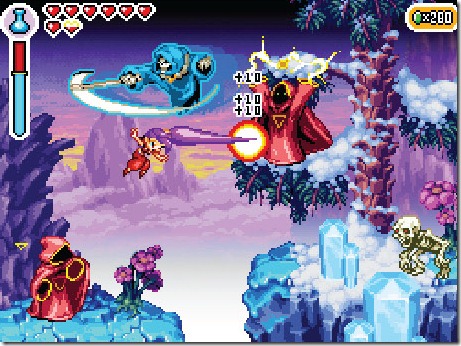 Following the release of Shantae: Risky’s Revenge, WayForward have moved on to their next Nintendo DSiWare project, titled Mighty Milky Way. Here’s the ESRB summary for the E-rated game:

“This is an action-puzzle game in which players help a green-skinned alien navigate toward warp portal exits. Players avoid hazards (e.g., pink puff balls, electric barriers) and create planets to use as jumping platforms. At the end of each level, players must dodge laser beams shot from a robotic T-Rex; the dinosaur sinks off-screen amid small explosions when defeated.”

A robot T-Rex in a game about the milky way? What the…? A spiritual successor to the similarly-named Mighty Flip Champs, perhaps?