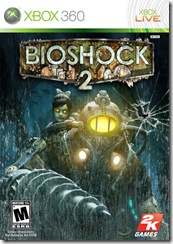 D3 Publisher, known for offbeat games like Dream C Club, Earth Defense Force and Zombies vs. Ambulance, picked up the rights to release Bioshock 2 in Japan. This week’s issue of Famitsu announced D3 as the publisher.

Think about that for a second, maybe a minute.

Top Spin 3, which D3 published in Japan this past July, may have bridged the deal. Prior to Top Spin 3, 2K games titles were released by Spike, the same company behind Kenka Bancho: Badass Rumble and a bunch of West to East localizations like Tomb Raider Legend and the first Bioshock.