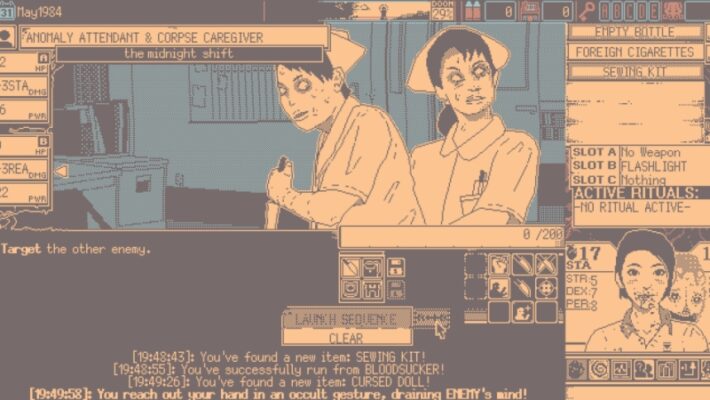 After a long period of seeming inactivity, horror RPG World of Horror may be getting a new update. Many fans thought the project had gone dormant while still in Early Access, as its sole developer, Panstasz, went effectively radio silent in late 2020. However, the developer tweeted promising “good news.”

it has been a truly miserable year
(good news soon) pic.twitter.com/BeEzjz9i80

Billed as a “Cosmic Horror Retro RPG,” World of Horror released via Steam Early Access in February 2020. The story takes place in a small, seaside town in Japan. It is threatened by otherworldly creatures that terrorize the residents and feed off their dwindling sanity. Players must confront the coming apocalypse in a “roguelite” structure with turn-based combat and tough choices. They’ll be able to influence their playthroughs with a deck of event cards that can manipulate the outcomes of battles against the darkness. The game uses a monochrome aesthetic and “1Bit art style” that evoke the look of early Japanese computer RPGs and adventure titles.

In the first public social media post in nearly ten months, Panstasz tweeted. The tweet was accompanied by several screenshots from a potential World of Horror update. No other details were forthcoming. Some replies to the tweet expressed relief, as speculation on message boards and the game’s Discord channel had led some to theories that Panstasz had died or abandoned the project.

World of Horror is available in Early Access on PC. Nintendo Switch and PS4 editions were planned for release in 2020, but at this time their status is unknown. Check out Siliconera’s playtest of the game.