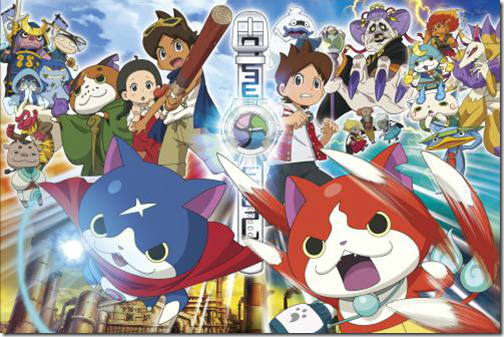 Yo-kai Watch first release in July of last year, which followed by a comic and anime that unexpectedly boomed in popularity. The Yo-kai Watch craze carried over through the series’ second installment, and the upcoming film already broke ticket pre-sale records, according to Sponichi Annex.

Yo-kai Watch 2 is getting a third version of the game, titled Yo-kai Watch 2: Headliner, which releases in December, and is already starting out strong with pre-orders. A week after the game releases, the franchise’s first feature film will also premier in Japanese theaters.

While it is expected for the film to be as successful as the rest of the media from the series, Japanese film, theater production, and distribution company Toho Co., Ltd. announced that ticket presales made a new record with 721,422 tickets.

It is said that a lot of the presales were made possible thanks to a limited edition “Yokai Medal Fuyunyan” was given away to the first 500,000 pre-orders for Yo-Kai Watch the Movie: The Secret is Created, Nyan! after it was initially announced in July 19.

On the day pre-sale tickets were made available, there were big lines of adults looking into buying tickets in theaters all across Japan, presumably to corner the market. However, according to Toho, the tickets continued to sell at a pace of over 10,000 a week afterwards.

With more than one month and a half remaining until the film premiers, the pre-order numbers are expected to continue rising. Level-5 also announced a second Yo-kai Watch film is in the works, and will release next winter.