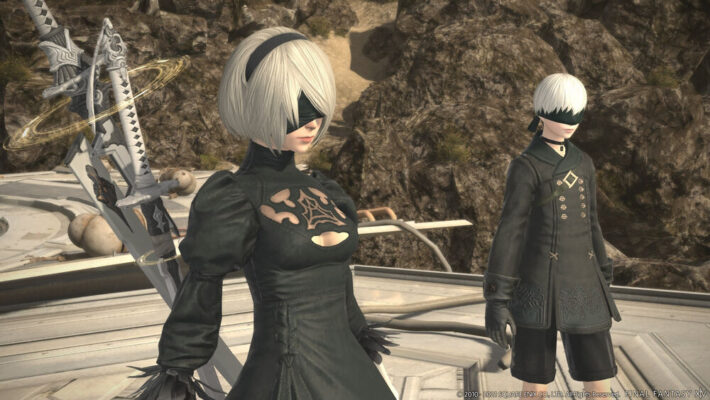 In an interview with PlayStation Blog, Yoko Taro discussed the story behind the YoRHa Dark Apocalypse NieR crossover raid in FFXIV and the various limitations that came with working on his first MMORPG. Yoko revealed that he was “okay even if people [didn’t] play [the raid]” and wanted it to be meaningful regardless.

When initially approached by FFXIV director Naoki Yoshida about the NieR crossover, Yoko Taro stated that he was worried about adding something so “foreign” to the world of Final Fantasy. Furthermore, while the NieR series had already collaborated with various titles, the alliance raid was the first time the team created large-scale content with a substantial story. To this, Yoko Taro used the Return to Ivalice raid as a reference for the amount of content required.

During development, Yoko Taro was “very surprised” by the production limitations of working on an MMORPG. One example was how the raid’s background music would require an external server to control when it would start playing — something Yoko described as “unthinkable” with a console game.

Notably, Yoko went into development with the hope that players would find YoRHa: Dark Apocalypse “meaningful even if it wasn’t played.” He adds that “ultimately, nobody has to do this alliance raid,” but that the ability to choose which content to interact with was what made MMORPGs “great.” Yoshida describes this aspect as “dishes” that players could enjoy. It was one of the main reasons why the FFXIV team decided to add the NieR crossover content.

Final Fantasy XIV is immediately available on PS4, PS5, and PC. The next Endwalker expansion is set to release on November 23, 2021, with pre-orders getting early access on November 19, 2021.