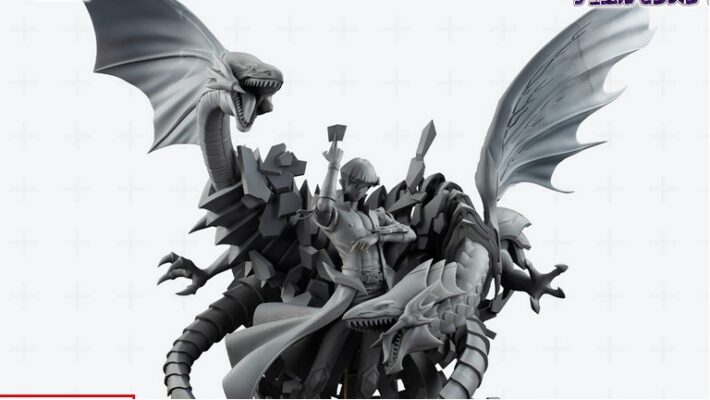 MegaHouse revealed an unpainted prototype of a new Yu-Gi-Oh Seto Kaiba figure featuring him and his Blue Eyes White Dragons. This version of Kaiba is from the movie The Dark Side of Dimensions, which came out in 2016. There is no concrete release window or price as of yet, as the figure is still pending licensor approval.

Though it is slightly hard to see due to the lack of close-ups or angles, Kaiba appears to be holding up two cards. He has two Blue Eyes White Dragons around him with their wings spread out and their tails curled around Kaiba. Kaiba also has his Duel Disk on his arm, and he looks as if he has just summoned the two Dragons during a duel. The figure stands at around 410 millimeters and is 550 millimeters wide.

The MegaHouse Yu-Gi-Oh!: The Dark Side of Dimensions figure for Seto Kaiba and the Blue Eyes White Dragon monsters is still a prototype. The finished product, as well as the release window and price, will appear on MegaHouse’s site in the future.