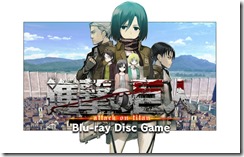 The anime series Attack on Titan will be released on Blu-ray soon. If you’re a fan of Hajime Isayama’s series you might want to get volumes three and six at launch. Those two volumes include visual novels developed by Nitroplus as a launch bonus. Namaniku ATK from Nitroplus is a character designer and the manga creator Hajime Isayama is supervising the stories.

Lost in the Cruel World on the third Blu-ray volume has a story from Hiroshi Seko about Mikasa Ackerman who meets Armin and Eren in the Recon Corps. A preview of A Choice With No Regrets from Gan Saaku is also included. This story focuses on Eren and Levi’s past. Attack on Titan volume three comes out on September 18.

Attack on Titan volume six is slated for December 18. This includes A Choice With No Regrets (the final version), an unnamed story about Eren and Ellen from Jin Haganeya, and an anime spin off Wall Sina, Goodbye from Hiroshi Seko.

The Blu-ray games will play on game consoles with Blu-ray drives like the PlayStation 3 and standard Blu-ray players/recorders.