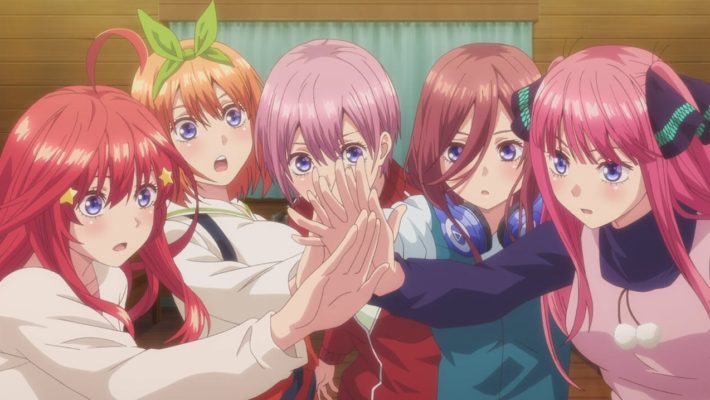 Twins? Pshaw, who can get by with just one identical sibling these days? In this economy, you need at least five to make an informed decision, and Mages is just the company to fill that niche with its new game based on the hit romantic comedy anime The Quintessential Quintuplets. The Quintessential Quintuplets ∬: Summer Memories Come in Fives! will appear on the PS4 and Switch in Japan on March 25, 2021.

Created by Negi Haruba, the original The Quintessential Quintuplets (Gotoubun no Hanayome in Japanese) manga followed a young high school student, Futaro Uesugi. Futaro is hired to tutor the Nakano sisters, quintuplets who share both genes and terrible academic performances. In a twist worthy of How I Met Your Mother, it’s stated early on that Futaro marries one of the five, but you have to go through the rest of the story to find out exactly who gets the ring. The manga was adapted into an anime series in 2019, and a second season (titled The Quintessential Quintuplets ∬) is set to air in January 2021.

As for the game, it follows an original storyline that sees Futaro trapped with the girls on a tropical island as a brief summer getaway is stretched out over weeks. There, Futaro will interact with the sisters, Ichika, Nino, Miku, Yotsuba, and Itsuki, as well as Futaro’s younger sister, Raiha. Players can unlock new artwork, costumes, and up to 14 endings. The gameplay promises a “heart-pounding desert island life” and a “five-girl tutoring adventure experience.” All cast members are fully voiced by their anime voice actors:

The Quintessential Quintuplets ∬: Summer Memories Come in Fives! is available to pre-order in Japan and is scheduled for release on March 25, 2021 on the PS4 and Nintendo Switch. No international releases have been announced. The second season of the anime will air in January 2021. The first season can be viewed in North America on Crunchyroll and Funimation.