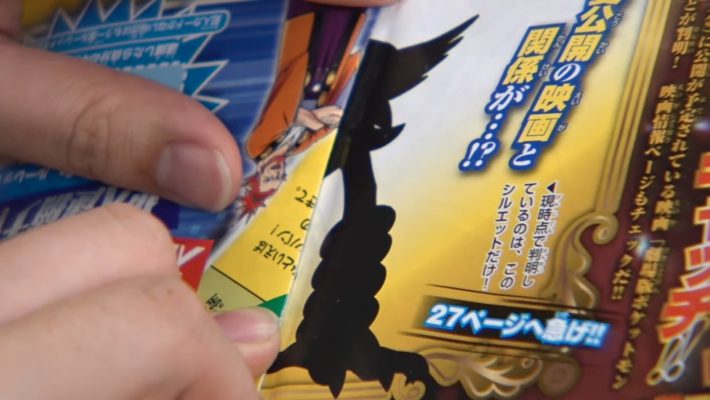 When it comes to Pokemon, there’s one Japanese manga magazine that is known for teasing and revealing new characters. Now, it is on the verge of doing so again. A Mythical Pokemon is going to be revealed on Pokemon Day 2020, CoroCoro is going to show off its silhouette in the March 2020 issue, and part of that new legendary Pokemon’s shadow has already been revealed. [Thanks, Serebii!]

The CoroCoro new legendary Pokemon silhouette tease appeared during a February 12, 2020 livestream. While most of the video is dedicated to looking at other features, the peek at the shadow occurs at the 23:48 minute mark. The hosts are very careful not to show too much, but over half of the creature’s body is shown. It could be a creature with plant-like elements, with roots appendages, leaves near its head, and perhaps flowery elements on top. Though, as pointed out in the comments by GalvanizingCoffee, that is just one part and could be an appendage.

You can check out the CoroCoro March 2020 issue livestream below. (This installment of the magazine will go on sale in Japan on February 15, 2020.)

The full Pokemon Day new legendary Pokemon reveal will occur on February 27, 2020. That character will then appear in Pokemon the Movie: Coco. Other events connected to that day include a Pokemon Vote with Google and a vote for the February 2020 Community Day character in Pokemon GO.