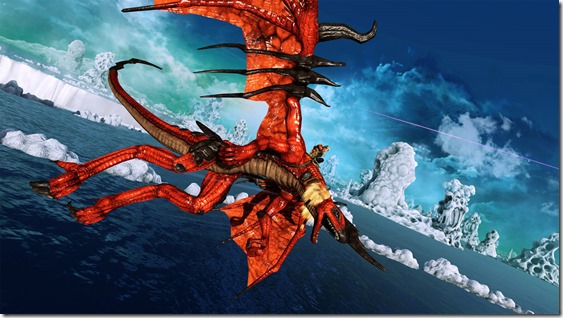 To say that Crimson Dragon has been through the wringer is an understatement. Fans of Panzer Dragoon were delighted to hear that series creator Yukio Futatsugi was developing a spiritual successor, except for that one very key detail: that it was a Kinect title.

Then, I played the demo at a Penny Arcade Expo in spring of 2012, and I became convinced that it wouldn’t be so bad after-all. Crimson Dragon played about as well as a Panzer Dragoon-like game that was driven purely by one’s full body motions could possibly be. And at the very least, it was far more enjoyable to play than another Kinect-driven sequel to another favorite game of mine—Child of Eden.

Then, silence. Crimson Dragon seemingly disappeared without a trace; one couldn’t help wonder if it had been cancelled. Then out of nowhere came the revelation that it was being prepped for the Xbox One, with traditional controller support no less. 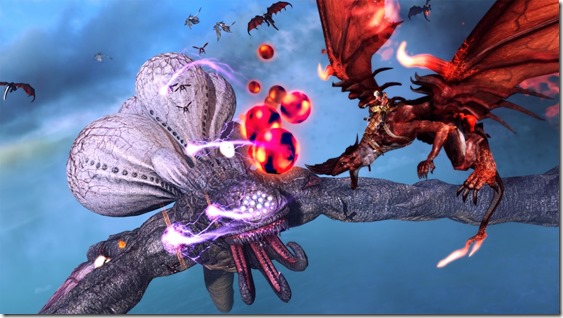 It was what Panzer Dragoon fans wanted: a traditional Panzer Dragoon experience, sans the need to wave one’s arms around. Enough to make one who had been on the fence about Microsoft’s hardware to seriously contemplate getting the One. So, does Crimson Dragon play like the next gen Panzer Dragoon we’ve all been waiting for?

Nope. Not really. At least not right this moment.

The left stick is for moving your dragon and the right stick is for aiming its targeting reticule. It doesn’t sound all that strange at first, though the original Panzer Dragoon games had both functions tied to the directional pad, so splitting the two is a tad bit jarring. Still, the dual analog control scheme exists elsewhere, so what’s the big deal?

The best way to describe Crimson Dragon’s interface is to imagine if both arms of your body has been mapped to one of the sticks on the Xbox One’s controller. Meaning, both the dragon’s movement, and that of the reticule, take quite a bit of movement of the sticks. It’s as if the full-body Kinect inputs were assigned to the sticks as is, without any adjustment. 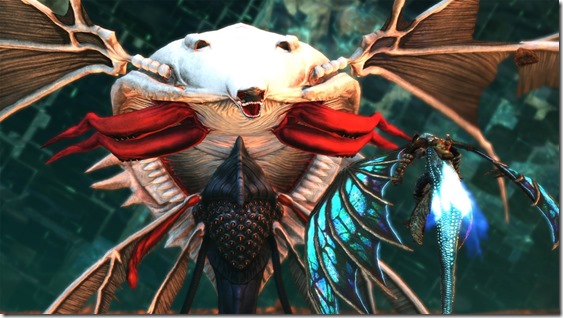 To aim with your arm, naturally the game needs to compensate for a wide range of motions. Why this range of motion wasn’t scaled down for controller is beyond me, but it most definitely should have been, given how confidence in Crimson Dragon is shaky, to put it politely. Thankfully, I was told that the controls in Crimson Dragon are still a work in progress, so hopefully it should be better when all is said and done.

As is, it was tricky playing the E3 demo. Not impossible, just difficult to have any real degree of finesse. Unlike the previous demo, which had the dragon and its rider soar high above the skies, you were in a cramped, underground environment, which perfectly highlighted how unwieldy the controls were.

As you navigate an underground cavern, which is lit up by the lava flow below, you encounter a large, multi-segmented boss that flies all around. Controls aside, Crimson Dragon oozes the DNA of Panzer Dragoon, it terms of art style, animation, and everything in between, which is one of the game’s highlights. 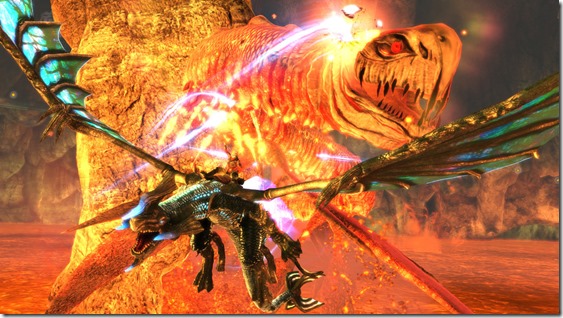 Those hoping for a substantial upgrade in terms of visuals from the Xbox 360 to the Xbox One will be disappointed. That said, Crimson Dragon looked incredible to begin with, so it’s a moot point. More importantly, though, every diehard Panzer fan will be beyond satiated; Yukio Futatsugi and his team’s aesthetic sensibilities shined on the Sega Saturn, and it most definitely looks beautiful here.

Unfortunately, I was not able to make out the music very well. The soundtrack is being composed by Saori Kobayashi, one half of team responsible for both Panzer Dragoon Saga and Panzer Dragoon Orta’s soundtracks, and which will undoubtedly sound great. I simply was unable to tell.

The demo was quite short, much like the last one; after dealing with the large caterpillar boss, and trying to navigate obstacles, one comes face to face with another dragon and its rider, presumably the end boss of that particular level. Again, the game was hard to control, yet very pretty. It’s a very good chance that the entirety of the game will follow that formula, unless the controls are adjusted.

If not, your average game player will be disappointed, as will Panzer Dragoon devotees, though the later will at least be able to indulge in another dip in Panzer Dragoon-like waters. At the very least, for many fans it would be better than nothing.