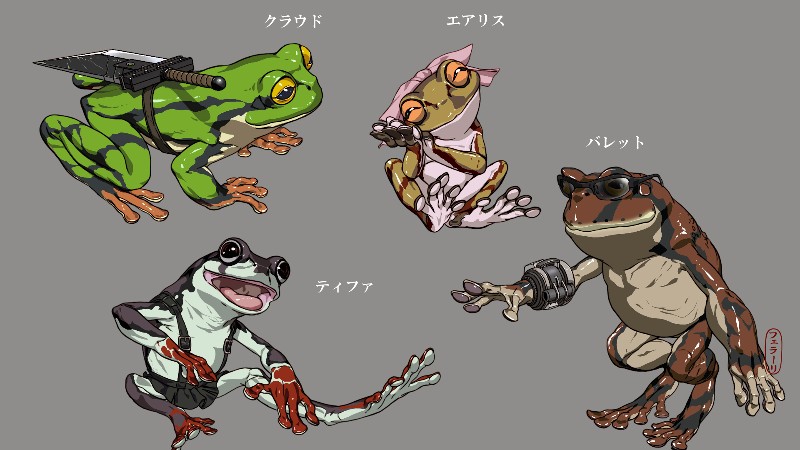 There’s new FFVII Remake concept art, and this shows how each character frog form looks when they are suffering from the toad status effect. This happens when a Sahagin, Sahagin Prince, or Malboro inflict the status on characters during a fight. However, people can also get an Enfeeblement Ring to make party members become frogs.

First, here’s the FFVII Remake concept art showing characters like Aerith, Barret, Cloud, and Tifa in their frog forms. In this version, each one has identifying features showing who they are. Cloud has a small Buster Sword. Aerith’s is wearing a bow. Tifa’s is wearing her outfit and has markings that resemble her gloves. Barret’s wears sunglasses and something on its right arm. It is also more muscular.

Next, the FFVII Remake frog status art focused on Sonon and Yuffie. Sonon’s has a staff on its back, while Yuffie’s wears a headband, bracer, and shuriken.

One close-up shows how each frog’s face differs when the toad status effect is in effect in FFVII Remake. Cloud and Barret are in the first row. Tifa and Aerith are in the second. Yuffie and Sonon are at the bottom.

Finally, Square Enix wrapped things up by showing what the status effect looked like in the original game.

Quite a few other pieces of art came up over the past few months. For example, the last FFVII Remake character to show up in one of these drops was Biggs. His concept art looked closer at his gun. Others looked at the Beginners’ Hall and Sector 5 Slums.