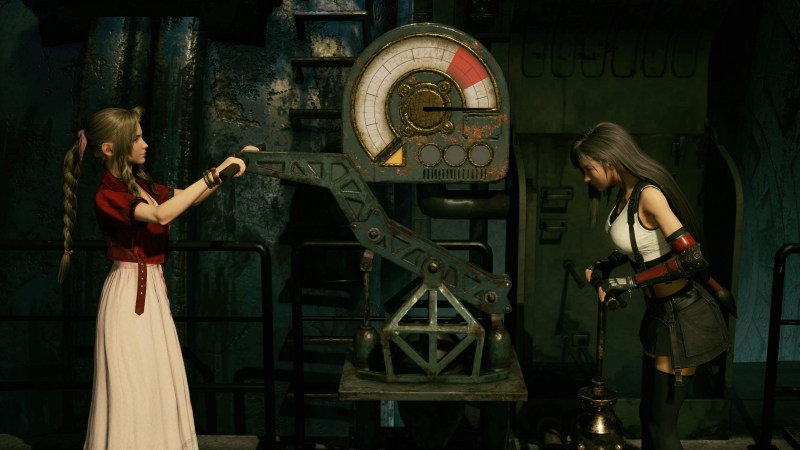 Final Fantasy VII Remake expanded greatly upon the time players spend in the starting city of Midgar. The change in pacing allowed Square Enix to give players a deeper look at the lives of Midgar’s inhabitants. Similarly, greater time spent with the initial cast of characters: Barrett, Aerith, and Tifa, meant that the game could expand on their relationships a bit more thoroughly. That’s the crux of the most recent FFVII Remake Revisited blog entry, which revisits Chapter 10: Rough Waters.

Note: The blog and this post contains spoilers for Chapter 10 of Final Fantasy VII Remake.

In FFVII Remake Chapter 10 coincides with the party’s escapades in Midgar’s sewer system, following their confrontations with Don Corneo. Tifa, Aerith, and Cloud must make their way back to  the Sector 7 Slums to prevent a catastrophe: Shinra’s plan to collapse plate above it, destroying the entire neighborhood. The sewer section was pretty small in the original game, but the development team wanted players to spend a bit more time “oppressive and gloomy area” to heighten the sense of achievement earned by leaving it at the end.

According to Toriyama, the original game gives the Tifa and Aerith surprisingly little time to interact directly while in Midgar proper. As such, the sewer situation provided the opportunity to have the pair accomplish something together, beyond just their interactions in cutscenes. That accomplishment was the water pump minigame. The minigame wasn’t originally in FFVII Remake‘s script, but Hamaguchi impressed upon the team “how important it was to insert a cooperative task between Tifa and Aerith” there.

The team also expanded on things like Aerith’s playstyle in FFVII Remake, as well as the sewer section’s signature boss fight, with the Abzu. Check out the full blog at this link.