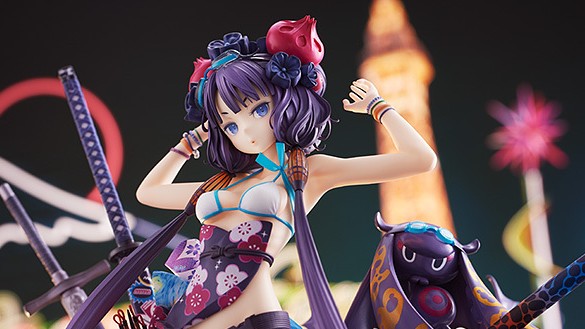 This is the swimsuit variant of Katsushika Hokusai. The typical version of her is Foreigner and involves her wearing a kimono. In Fate/Grand Order, the Servant appeared as part of the All In! Las Vegas Championship Match ~Seven Duels of Swordbeauties~ event. That debuted in Japan in August 2019, then showed up in the English version in July 2021. Everyone had a chance to collect her, as she was a free four-star unit.

Here she is in-game.

And here’s the tweet showing off the upcoming figure.

Preorders are set to open from the 17th of September, 2021! Stay tuned for more information!#fgo #fate #goodsmile pic.twitter.com/hHotBcmqJx

This will mark Good Smile Company’s fourth figure of Katsushika Hokusai. In 2020, a Nendoroid of her appeared. In September 2021, a 1/7th scale figure of her will show up. And in 2022, people will be able to get a 1/7th figure of her in her Travel Portrait Craft Essence outfit.

Fate/Grand Order is available on Android and Apple iOS devices. The FGO Saber/Katsushika Hokusai figure pre-orders will open on September 16, 2021.