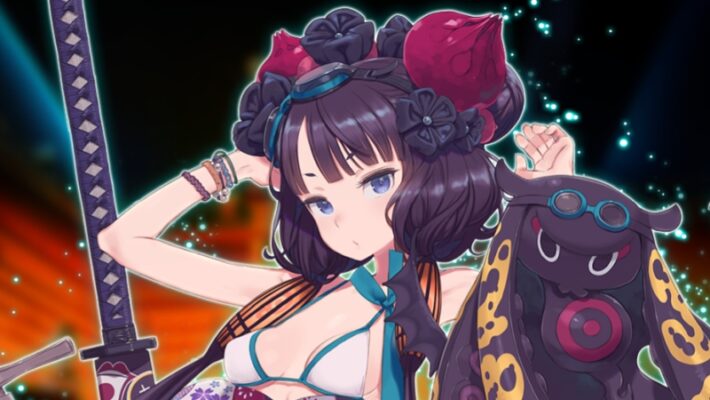 Right on the heels of its Summer 2020 event rerun, the global edition of Fate/Grand Order gets Las Vegas as the locale for its 2021 Summer event. Titled All In! Las Vegas Championship Match ~Seven Duels of Swordbeauties~, the new event will kick off on July 29, 2021.

The Masters of Chaldea will fly into the Nevada desert to defeat the Servant “Swordbeauties” that have taken over the Las Vegas strip and turned it into an oasis. By their side in the heart of decadence is Katsushika Hokusai. Discarding her pen to take up the sword, Hokusai joins the party as free 4-Star Saber-class Servant awarded to event participants.

As for the Fate/Grand Order Las Vegas event itself, the game will capitalize on the city’s association with gambling by letting its players gamble even more than is typical for a gacha game. To take on quests, players will need to bet QP, the game’s equivalent of cash. Clear the quest, and players will win double the QP. Those who fail will lose the amount wagered. Extra-challenging quests will also pop up for Masters to wager huge amounts of QP on,. Some quests will also unlock cosmetic skins for the Servants Merlin, Siegfried, and Fuuma Kotarou.

As no summer event is complete without swimsuited characters to pursue, the Fate/Grand Order Las Vegas event will include two premium summoning banners and a total of six new characters besides Hokusai (Saber). The first banner is led by a 5-Star Berserker-class version of famed swordmaster Miyamoto Musashi. She starred in Shimousa, the storyline the Las Vegas event references. Alongside her are 4-Star versions of Osakabehime and Carmilla. Osakabehime will trade her bats for bullets, becoming a waterside Archer-class airsoft enthusiast in the interim. Carmilla, perhaps taken with Vegas’ reputation for glitz and glamour, will be the Rider-class “Mistress C”, a sportscar-driving phantom thief.

Based on the event’s first 2019 run in Japan, there will also be a second summoning banner sporting a Ruler-class version of Altria Pendragon, a Lancer-class version of Fate/Extra CCC star Meltryllis. And after years of complaining about it, Shinsengumi swordswoman Okita Souji gets a swimsuit this year, as well as an Assassin-class conversion.

The Fate/Grand Order Las Vegas event will run from July 29, 2021 until August 18, 2021. The game is immediately available on Android and iOS devices.