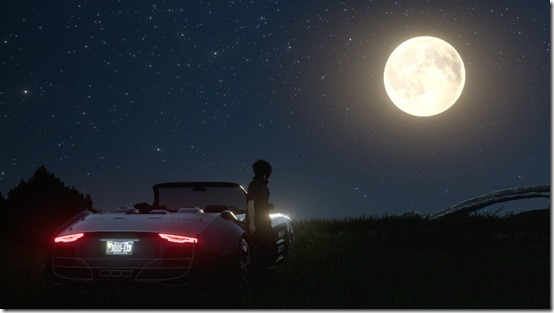 Square Enix shared the latest trailer for Final Fantasy XV last month at Tokyo Game Show, and we didn’t have to wait too long for some more, as director Hajime Tabata made an appearance at the Paris Game Festival in France, to show off some more footage. (Thanks, Mika IIM)

During the presentation, Tabata talked about how he was a little worried about being part of a presentation for the first time in Europe, and was concerned that fans would be upset if he showed up empty-handed, so he had some surprise Final Fantasy XV footage for the fans.

After showing the latest trailer that was revealed during Tokyo Game Show, Tabata revealed the latest gameplay footage of the game, which shows a little bit of Noctis and friends traveling around on the world map. Tabata said that the game is all about the journey among friends in the vast world of Final Fantasy XV, so the footage was made to show what it looks like to have our heroes running across the fields. To summarize it, “bromance” is the theme behind the game, said Tabata with a laugh.

The footage that is shown starting at the 6:49 mark of the video was made to mainly show the characters getting around, so Square Enix removed all kinds of enemies and events from the area, but Tabata mentioned that the final game will certainly have NPCs, enemies, and various events at the places shown in the footage.

According to the director, Final Fantasy XV’s “Active Cross Battle” system will focus heavily on attacking, defending, and cooperative moves between Noctis and his friends, which all have their own buttons to pull off. As far as more details on how the commands work are concerned, Tabata said more will be revealed in the near future.

Next, during a Q&A with fans, Tabata was asked that since Final Fantasy Type-0 HD will have Japanese voicing, if that’s something Final Fantasy XV will also include outside of Japan.

After a short pause, Tabata asked the audience if they’d prefer for Final Fantasy XV to also include Japanese voices in the West, which was met by a loud cheer. Tabata jokingly said that it was the loudest cheer of the day, and said that they would indeed add it in, and they’ll do their best with the voices.

The next question asked whether we’ll see classic Final Fantasy monsters appear in a new and fresh form for Final Fantasy XV. Tabata replied that the concept behind the monsters is to get their original artwork design from Yoshitaka Amano’s work, and to depict them as convincingly as possible.

There will also be Summoned Beasts and much more to look forward to. It sounds like the fans wanted to hear more, but Tabata said that if he revealed everything now, there wouldn’t be any more surprises for later.

As seen in the earlier demo footage that featured a frog to show the water graphic effects, many fans were curious about whether that was a sign that the Toad or Frog spell will return to the series. Unfortunately, Tabata said, this is actually a commonly asked question, but that bit was merely the development staff fooling around. However, there will be other spells to look forward to, which will be announced at a later date.

Towards the end of the footage, the scene shifts towards night time, and when that happens, dangerous monsters will show up, so you’ll have to make sure you get somewhere safe.