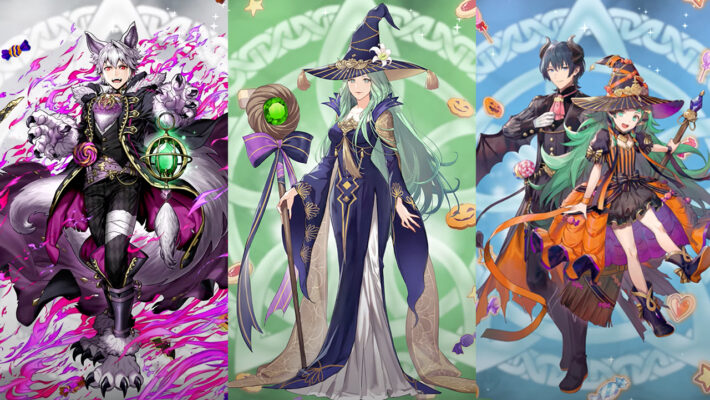 Fire Emblem Heroes‘ Shared Bounty summoning event will add four dragons from the franchise’s recent past. The seasonal batch of units, part of the mobile game’s annual Halloween celebration, are all dressed in festive attire. The four heroes will join the game on October 7, 2021.

Robin: Fall Reincarnation is a new alternate form of the Fire Emblem: Awakening protagonist, again possessed by the fell dragon Grima. He follows last year’s similar version of female Robin, dressed in a wolf costume. The colorless armored dragon is voiced by David Vincent and illustrated by Okuma Yugo.

Rhea: Witch of Creation marks the first playable Rhea in the game. She previously appeared as a partner hero for a summer variant of Byleth. The character will once again be voiced by Cherami Leigh, with art by Ichikawa Halu. This version of Rhea is a green infantry dragon. Seiros: Saint of Legend, a mythic hero, joined the game in January 2021.

Rounding out the banner is red infantry dragon Kurthnaga: Autumn Goldoan. Kurthnaga, who appeared in Fire Emblem: Path of Radiance and Fire Emblem: Radiant Dawn, is making his Heroes debut. His father, King Dheginsea of Goldoa, joined the game through last year’s Dragons Harvest banner. Kurthnaga’s voice actor is Brandon Winckler, and his artist is hou. Kurthnaga is available at four-star rarity on this banner, and all four are available at five-star rarity.

In addition to the four summonable heroes, a fifth will join as a Tempest Trials reward unit. Sophia: Cobweb Prophet, originally from Fire Emblem: The Binding Blade, will also be available to players to earn on October 7, 2021. This new version of Sophia is a flying blue tome.