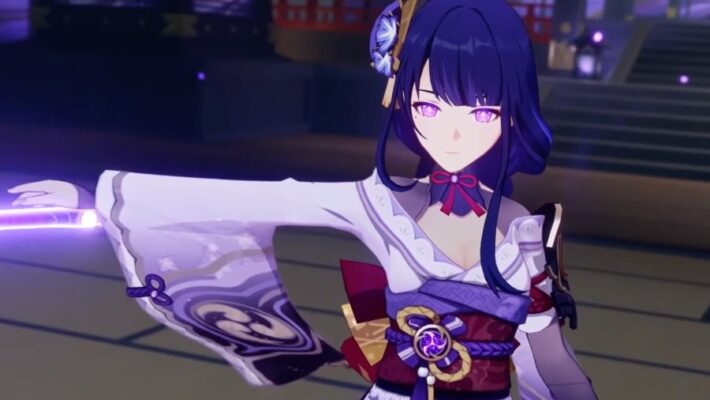 The next Genshin Impact Collected Miscellany video is here and this time, it focuses on the Raiden Shogun. These videos always have Yuri “Dainsleif” Lowenthal describing the new unit while showing gameplay footage. As it goes over the entire Raiden Shogun moveset, it also proves a handy video to help think over possible build ideas when considering a weapon or artifact set.

Things begin with an overview of who the Raiden Shogun is and what she means to Inazuma. Then, it looks at her All Preserver passive, which makes it cost less Mora to ascend polearms and swords. After that, her normal attack, charged attack, Elemental Skill, and Elemental Burst are shown. The Genshin Impact video points out she’s good at helping her allies do more damage and be stronger without being around.

As for possible Raiden Shogun build ideas, seeing her moveset in action may help with some ideas. The latest Epitome Invocation banner has an Engulfing Lightning polearm basically built for her. That’s a five-star focused in increasing a character’s Energy Recharge and attack. Since you want to get her Energy Recharge above 100% to take advantage of her Enlightened One passive that increases her Electro DMG and Musou Isshin energy restoration, prioritizing attack and energy recharge is a good move. A more budget option could be a Kitain Cross Spear or perhaps even a Prototype Starglitter that offers a bonus for using her Transcendence: Baleful Omen Elemental Skill.

When it comes to possible artifacts for a Raiden Shogun build, there is a set in-game essentially created with her in mind. MiHoYo already added the Momiji-Dyed Court Domain in Inazuma with the Emblem of Severed Fate line of artifacts. Equipping two would increase a character’s energy recharge by 20%, which is what you want for Baal. You also get increased Elemental Burst damage connected to how much energy someone has if you have four pieces. So getting four pieces from that would be ideal. Though, if you want to go with things you might already have, The Exile set also offers 20% energy recharge for two pieces and would give two energy to people in Raiden Shogun’s party when she’d use the Secret Art: Mousou Shinsetsu Elemental Burst.

Genshin Impact is available for the PS4, PS5, PC, and mobile devices. It will also come to the Nintendo Switch. The Raiden Shogun banner will be around until September 21, 2021.