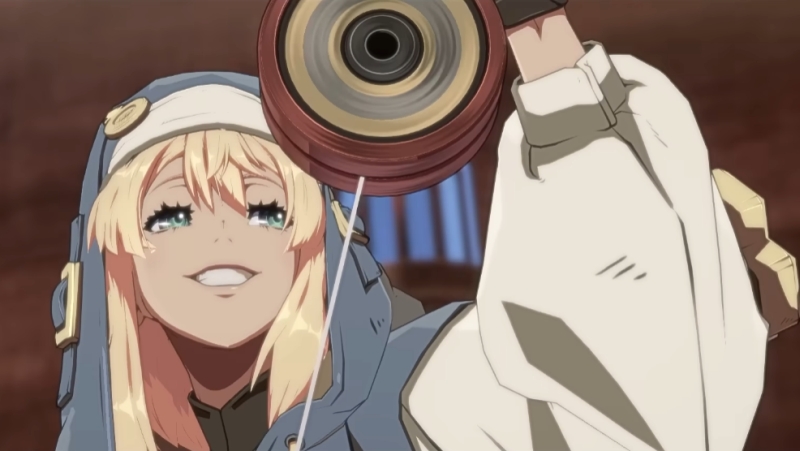 If it wasn’t clear enough before, it certainly is now: Bridget, longtime Guilty Gear alum and the most recent addition to Guilty Gear Strive‘s roster, is a woman. The latest issue of Arc System Works’ Guilty Gear Strive Developer’s Backyard newsletter features, among other things, comments by Game Director Akira Katano and Developer Daisuke Ishiwatari on the character.

According to Ishiwatari, Bridget self-identifies as a woman.

Here’s the full quote in English. The Japanese version of the article can be found at this link.

“We’ve received many inquiries about Bridget’s gender. After the events of Bridget’s story in Arcade Mode, she self-identifies as a woman.

So, as to whether “he” or “she” would be the correct pronoun for Bridget, the answer would be “she.”

Ishiwatari went on to connect Bridget’s journey in discovering her identity to her backstory (where she was assigned male at birth, but raised as a daughter due to her village’s superstitions), and the events of her story in Guilty Gear Strive Arcade Mode. In her exchanges with fellow fighters Goldlewis Dickinson and Ky Kiske, “Bridget faces parts of herself she has tried to ignore, and makes a big decision for herself.”

Katano also put to rest a misconception about the nature of storytelling in Guilty Gear‘s Arcade Mode.

“By the way, although the difficulty and story dialogue of Arcade Mode change depending on your match results, this doesn’t change the main plot, nor are there alternate endings such as “good” or “bad” endings. The same goes for other characters’ Arcade stories as well. In general, these variations show other aspects of the characters.”

This misconception was previously used by some commentators to argue that Bridget only self-identifies as a woman in a “bad” ending of Arcade mode, thus making it invalid. Though not referencing these arguments directly, Katano’s comment appears to refute this line of reasoning.

Besides weighing in on Bridget’s gender identity, the team delivered other insights about the character and their upcoming plans for Guilty Gear Strive. They mentioned that Bridget’s mechanics were reworked from earlier appearances to make her more accessible to newer players. Thanks to the reworks, Bridget in Strive is “the kind of character where it’s fun even just pressing buttons.”

In keeping with a roadmap for the game shared early in August, the Fall 2022 season should see the rollout of an update to support cross-platform play between PS4, PS5, and PC. A seventh new character will also be added. Beta tests for crossplay will commence in late September or early October 2022, with announcements via the official website.

Guilty Gear Strive is available on PS4, PS5, and PC. Bridget is playable for players who purchase Season Pass 2.