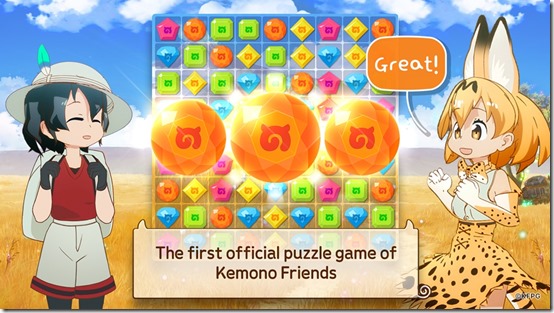 A Kemono Friends game has been released on Android and Apple iOS devices worldwide. People can now pick up a gem matching game called Kemono Friends: The Puzzle. It is free-to-play via Google Play and iTunes.

In Kemono Friends: The Puzzle, players follow Kaban and Serval Cat as they match gems. During these stages, of which there are apparently 1,000, you may have to move Cerulean or find the Lucky Beast. Other friends, like Japanese Crested Ibis and Alpaca Suri, may appear at the top of the puzzle as you play.

Kemono Friends: The Puzzle is available for Android and Apple iOS devices.