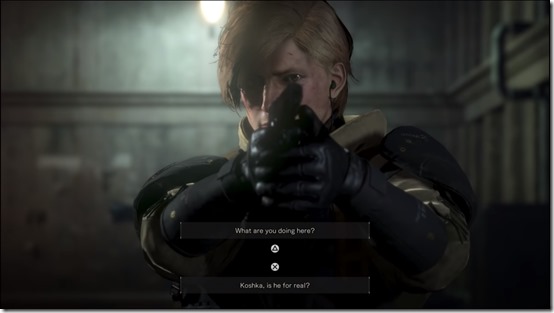 Left Alive is tempting. It is a Front Mission spin-off with three Novoslavan people who are caught up in and around the city of Rutenian when the Garmonian army invades. While Leonid, Mikhail, and Olga all have combat experience, none of them are in a situation where they can go in guns blazing. You have to be cautious and methodical, and the game is going to do everything in its power to punish anyone who doesn’t do what it strongly suggests they should.

Left Alive wants you to take certain routes through its levels. Sometimes, you may have an idea of the telegraphed path. You could see additional materials that way. There might be fewer soldiers there. It is about being observant. The trick is, even a safe route might not be entirely safe. Deviating from it in any way could result in hordes of enemies descending on you and killing your current characters. (Seriously, starting in the second mission, there were moments where it seemed like far more enemies that seemed to be in the immediate area would swarm and descend upon Olga.) This is especially discouraging when there are clearly visible materials that you know you could use, like additional empty cans, sensors, and vodka (for Molotov Cocktails), in a place where you know you are dead if you even attempt to get those lifesaving crafting components. 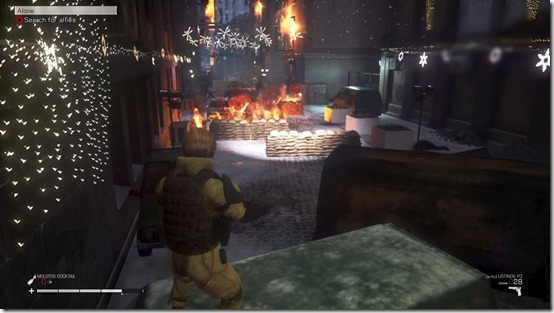 It gets very real, very fast. The first mission, where you help Mikhail get through a city after his Wanzer is shot down, is very scripted and rather safe. The only real hot spot is just before you reach the first save point in the game, as you come out of an alley and have three enemy soldiers ahead of you. (Tip: Hopping on top of the van and tossing a few Molotov Cocktails works well. Save any RC Explosive Cans for the sewer section ahead.) But the second mission with Olga takes no prisoners. There are drones flying overhead, enemy soldiers, enemy snipers in towers, and Wanzers overlooking the streets, and even the designated path that can involve doubling back a bit will send you into spaces where cover isn’t available and not checking for a Wanzer can result in a one-shot kill.  You have to essentially test the limits of enemies’ AI, realize that a common soldier will just not notice you if you walk past, so long as you are certain you are moving slowly and they have just turned on their designated route so they are not looking at you. By the time you play as Leonid, the third playable character, for the first time, it clicks that some of this might be trial and error, as you determine what enemy AI is and isn’t capable of, get the lay of the land, and figure out, “Okay. I was definitely not supposed to even try and go here.”

There are a lot of bothersome design elements, but one that can be quite annoying is the hiding mechanic. As you go through levels, you sometimes find a place where you can hide. Maybe it is a dumpster. Perhaps it is a porta potty. In any case, if you head into one and an enemy doesn’t see you, but did follow you, you can use this hideaway as an opportunity to evade detection. However, there’s this issue where Left Alive will still have Koshka alerting you to the enemy in the immediate vicinity and showing you the red indicator noting that the opponent is in the direction they went when they passed by your hiding spot. However, the game will reset. You’ll never see the enemy double back. You can’t use it as an opportunity to give it a moment, then jump out and tackle the foe. The soldier magically appears back in their original position.

Another issue is with the survivors. Sometimes, you will be in a mission in Left Alive and have people you could try and escort to safety. Except all of them have AI that isn’t great. As mentioned earlier, the game has routes that you are supposed to take, and these survivors have their own routes. You have to have your character right next to one of these people to tell them when to go. To direct them remotely, you have to bring up the map to tell them what to do from there, instead of being able to have some sort of signal otherwise to say when they should stop or go to avoid threats. Since these people do not always offer great tangible rewards, beyond seeing you did good things in the Action Report at the end of a mission, it can be frustrating dealing with their AI, clearing out their path, and perhaps experiencing the frustration of seeing them die despite doing all you could. 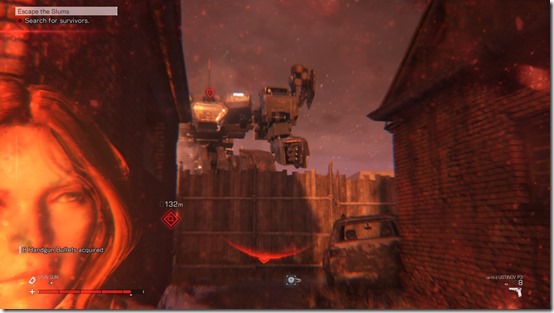 Eventually, some things do start to click in Left Alive. Areas are revisited, meaning you get to have a sense of familiarity and know where notable locations (like save points) are and which paths might be blocked off. But even if you have some idea of what lies ahead, it doesn’t ward off the frustration that can come from being certain you did move properly, only to have AI not respond in the way you anticipate and see lots of progress lost. Or, to know you made a mistake that will have a negative effect on your Action Report. That is one of the really heartbreaking parts, given that you do get to make a lot of choices with consequences here and different endings. Making one mistake, knowing it isn’t what you wanted, but also not wanting to experience marred gameplay is a tragedy.

Left Alive has these elements that seem promising. We have actions with meaning, with the things we do and the choices we make having real weight. There is a setting with intriguing looks at war through three different people’s eyes. Yet, there is AI that hampers thing and an unforgiving nature that might make it really difficult to enjoy what you are doing. It could be a game that might get better along the way, with the help of updates.

Left Alive is available for the PlayStation 4 and PC.