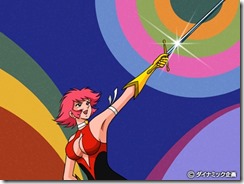 We mentioned Earth Devastating B-rank Girlfriend from Level-5 before since it’s pretty unusual! The game fuses RPG battles with a slot machine. You lead a platoon of women mercenaries to fight off invaders. The girls in your party work regular jobs as bartenders and at pachinko parlors, but when they transform they get ridiculously powerful.

Cutie Honey a manga icon from the 70s will make a cameo in Earth Devastating B-rank Girlfriend. New artwork and voiceovers were made for Honey. She also has her usual special attacks and a transformation that Level-5 will reveal later on.