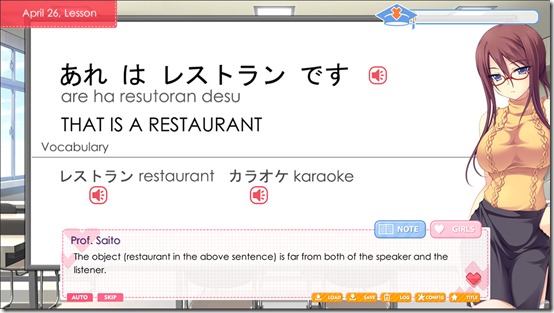 Back in 2015, Papurika.moe announced it was working on a visual novel called Love Language Japanese: Year 1 Gentleman Edition, a visual novel about a young man coming to Japan to learn the language. Now, the game is available via Steam. People with Windows PCs can pick it up now. A launch sale is in effect, temporarily bringing the $19.99 price down to $15.99 until January 18, 2019.

In Love Language Japan, players get to attend Koto Gakuen as an exchange student. They will get to go through 50 lessons to help them learn the language, as well as get closer to characters like Helen, Sarah, and Professor Saito.

Papurika.moe has confirmed that future support will be provided for Love Language Japan. For example, a Mac version is in development and unspecified new features are planned. It currently supports Steam Achievements and Trading Cards.