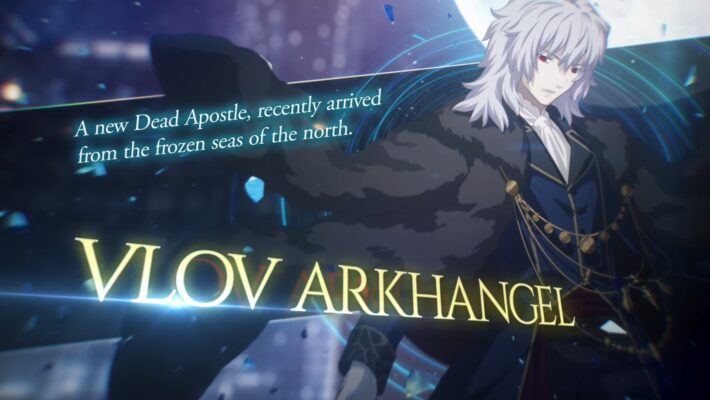 Type-Moon has released a new character trailer for Melty Blood Type Lumina, revealing Vlov Arkhangel as a playable character in the upcoming fighting game. Vlov is featured in the Tsukihime -A piece of blue glass moon- remake and is one of the Twenty-seven Dead Apostle Ancestors. He is capable of attacking opponents with large shards of ice and wields a large cleaver-like sword. [Thanks, Famitsu!]

Vlov’s fighting style primarily centers around long-ranged and projectile attacks that utilize his vampiric magic abilities. Interestingly, the character has a “Flame” and “Ice” mode that change depending on the direction of the match. While he starts off using Flame mode, if Vlov is one round away from losing he’ll switch to Ice mode. Compared to Flame attacks, Ice attacks and projectiles are faster and can help turn the tide of the match.

You can check out the official Melty Blood Type Lumina Vlov trailer below:

Unlike his appearance in the Tsukihime remake, however, Vlov uses his cleaver during both modes instead of switching to his lance during Ice mode. Kenjiro Tsuda voices Vlov Arkhangel. He’s a prominent Japanese voice actor who also plays Kento Nanami in the anime adaptation of Jujutsu Kaisen.

Previously, Type-Moon revealed that Tsukihime‘s main antagonist Michael Roa Valdamjong would be a playable character. It has also been regularly uploading gameplay trailers pitting popular characters like Akiha and Arcueid against each other.

Melty Blood Type Lumina will launch for the Nintendo Switch, PlayStation 4, Xbox One, and PC on September 30, 2021.