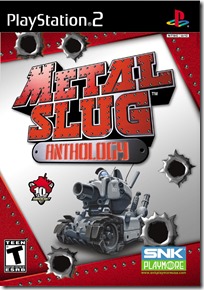 People picking up the Metal Slug Anthology are getting almost every entry in the main series. Metal Slug, Metal Slug 2, Metal Slug X (the upgraded version of Metal Slug 2), Metal Slug 3, Metal Slug 4, Metal Slug 5, and Metal Slug 6 are all available. The only absent major installment is Metal Slug 7, also released as Metal Slug XX, which was released on the Nintendo DS, PlayStation Portable, and Xbox 360. This collection also includes an art gallery, sound gallery, and an interview people can read.

There’s one important thing to note about this Metal Slug Anthology release. The PlayStation 2 version of this game was known for having input lag. Keep that in mind when considering grabbing this PlayStation 2 Classic for a PlayStation 4.