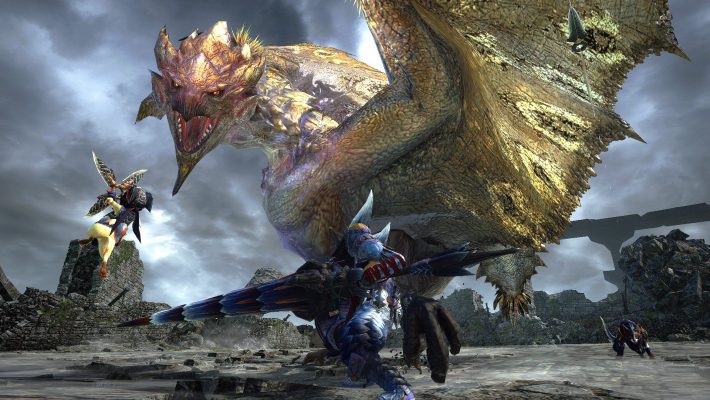 Capcom officially revealed a host of new content that will appear as part of the first Monster Hunter Rise Sunbreak free title update. In addition to new locales and the start of weekly event quests, it is also adding four new monster variations to fight, including the return of the Gold Rathian and Silver Rathalos variations. The free title update is available now.

Previously, Capcom announced the first title update would add the Lucent Nargacuga and Seething Bazelgeuse variations, both of which appeared in previous Monster Hunter titles. Now we know that the Gold Rathian and Silver Rathalos variations will also join the list. Players must be at least MR 10 to take on these hunts. What’s more, the new trailer for the title update also shows off the new Forlorn Arena area. This new area is apparently “teeming with rare monsters” and is likely where some of the new monsters will appear.

Four new monsters join #Sunbreak with free Title Update 1! You'll need to be at least MR10 in order to face off against these new threats. pic.twitter.com/8M6fQlg6ZQ

In addition to the new hunting content, Capcom also promised new crafting, DLC, and quest content. Firstly, the title update will add new Anomaly Investigations. The conditions for these Anomaly Investigations are randomly generated, and reward players with Anomaly crafting materials and Anomaly Research points. Collecting enough of these research points will level up your Anomaly Research Lab, unlocking new Investigations. The crafting materials can be used to upgrade your master rank armor and weapons through Qurious Crafting.

Furthermore, weekly event quests will be making their return from August 18, 2022. The trailer teases a few of these event quests and shows off an arena battle against two Rajang. Similar to previous event quests, it will reward players with new equipment. More paid DLC is also set to appear after August 10. These will include new hairstyles, poses, stickers, and armor. Notably, Fiorayne is shown drinking tea at the bunny dango shop.

Monster Hunter Rise Sunbreak is available to play on PC via Steam and Nintendo Switch.