Solo indie game developer Phillip Seifried has released his barmy space combat game Ace Ferrara and the Dino Menace on iOS. If you’ve ever wanted to fight dinosaurs in spaceships and be made a fool out of by talking cats, then you’ll want to give it a look.

Ace Ferrra marries space combat of the Wing Commander and X-Wing style with the humor and antics of ‘80s Saturday afternoon cartoons. You take on the role of incompetent intern Ace Ferrara as he rises to the position of accidental galactic hero.

Initially, Ferrara is tasked with escorting coffee freights for the Proton Riders’ flagship Discordia. He puts up with it as he’s a huge fan of the Proton Riders,  which is a group of super pilots sworn to battle the titular dino menace that has declared war against humanity. Across the game’s 23 action-based missions, you’ll rapidly rise through the ranks with a mix of skill and luck to eventually fight alongside the Proton Riders themselves. This is a dream come true for Ferrara.

To get to that point, you’ll have to master evasive barrel rolling while firing on target to defeat the legions of space raptors and huge capital ships in five different spaceships, from light scouts to heavy bombers. You’ll fight against beautiful backdrops including the upper atmosphere of a gas giant, stormy space nebulas, and even a red supergiant inside the game’s cartoon universe. 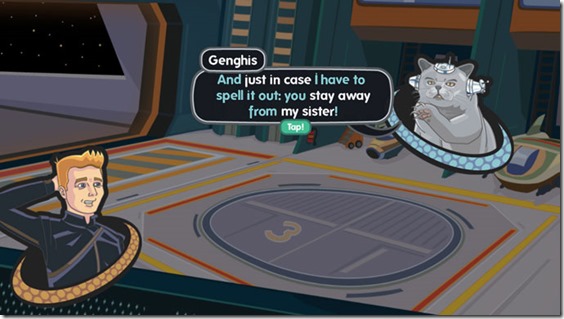 In between the space battles you get the chance to check in on the the game’s amusing cast to forward the story. You’ll interact with nefarious T-Rex royalty, daredevil adventurers, and wise-cracking felines. These oddball but nonetheless amusing story sequences are completely optional so if you want to get straight back into the action you can skip them altogether. It’s worth sticking with them, though.

You can purchase Ace Ferrara and the Dino Menace on the App Store for $3.99. It will also be coming to Android in October, with Windows, and Mac versions arriving soon after. More information on the game can be found on its website.