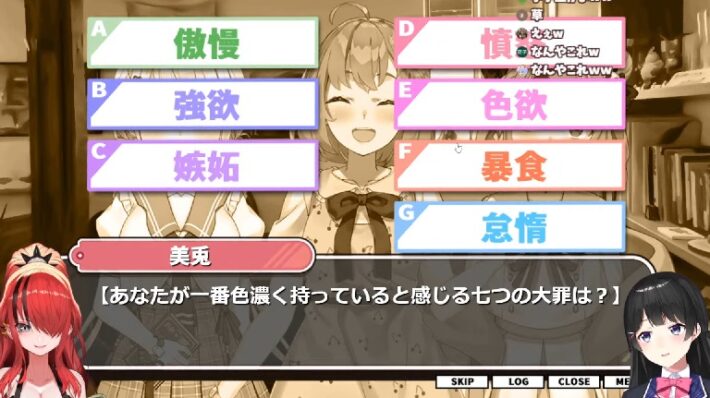 Mito Tsukino of Nijisanji uploaded a free visual novel game called Niji Shindan that will tell you which Nijisanji VTuber you are most similar to. One playthrough of Niji Shindan (which is short for Nijisanji no Type Shindan) takes about 40 minutes. For those curious about how it will work, Mito has a video where she and Lain Paterson (also from Nijisanji) play through the game. [Thanks, Dengeki Online!]

There is a browser version and an application. However, according to Mito’s Twitter, the browser version has a few bugs. She recommends downloading the game. Currently, Niji Shindan only runs on Windows. Nijisanji no Type Shindan, which literally translates to “Nijisanji’s Personality Test,” uses the choices you make while interacting with Nijisanji members to determine who you’re most like.

Here is a video of Lain Paterson playing the game on Mito Tsukino’s channel:

The game is free. On the website to download it, Mito writes that people are free to stream it and monetize those streams. However, she requests that they include a link to the game in the video description. Interestingly, it seems that only the girls are in Nijisanji no Type Shindan. VTubers who make appearances include Honma Himawari, Inui Toko, and Lize Helesta.

Nijisanji no Type Shindan is available in Japanese on Windows PCs and in browsers for free. There are a few issues with the browser version so, if possible, Mito recommends downloading the game.