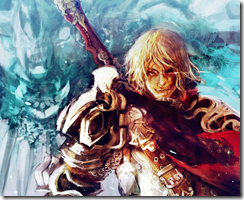 Project Phoenix is an ambitious project led by Hiroaki Yura who worked on Valkyria Chronicles and Diablo III. The game is a real time strategy game blended with JRPG elements. Project Phoenix’s main character is Marcus, an angel with amnesia, who travels through the land of Azuregard. Yoko Enoki is writing the story and Final Fantasy XII artist Kiyoshi Arai is the art director.

Project Phoenix has Western staff members on the development team too like Vaughan Smith who worked on L.A. Noire and Steffen Unger who worked on Halo 4 to handle the game’s 3D models. Nobuo Uematsu is also working on the game as the lead composer.

Project Phoenix was quickly funded on Kickstarter. The fundraiser has 28 days to go and the next round of funding will be used to make detailed cities and customizable characters. If the project reaches $1,025,000 the game will add an overworld and a battle inside a Kraken.

Creative Intelligence Arts plans to release Project Phoenix in 2015 for PC, Mac, and Linux. iOS and Android versions will also be made, but the game will be different for mobile platforms. PlayStation 4 is also being considered, but other platforms have not been finalized. A digital download is $20 and includes access to a closed beta. A digital collectors edition with a making of documentary, soundtrack, and art book is $50. Super reward tiers include creating a boss, NPC, and playable character which require a $10,000 investment.