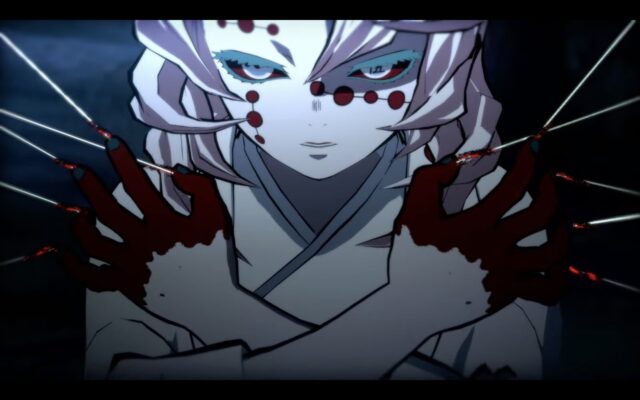 During gamescom 2021 Opening Night Live, there was a “blink and you’ll miss it” peek at Rui in Demon Slayer: The Hinokami Chronicles. Sega offered a look at the demon Tanjiro will face in a boss fight. The segment also showed off how Rui was designed and added to the game.

Here’s the brief clip showing off Rui in Demon Slayer: The Hinokami Chronicles. We get to see how the character model was designed first. Then, we get to watch Tanjiro and Rui fight each other.

In Demon Slayer Rui shows up during the Natagumo Mountain Arc, which follows the Tsuzumi Mansion Arc. (Sega already showed us footage from that part of the game.) He is one of the Twelve Kizuki and known for his strength and ability to use spider-like threads to attack his enemies. While CyberConnect2 did confirm demons will be made playable via a free post-launch update, it is unknown if that means Rui could join the cast.

Demon Slayer: Kimetsu no Yaiba The Hinokami Chronicles will come out on the PlayStation 4, PlayStation 5, Xbox One, Xbox Series X, and Windows PC on October 14, 2021 in Japan and on October 15, 2021 in English worldwide. If someone gets the Digital Deluxe Edition, they can start playing on October 13, 2021.