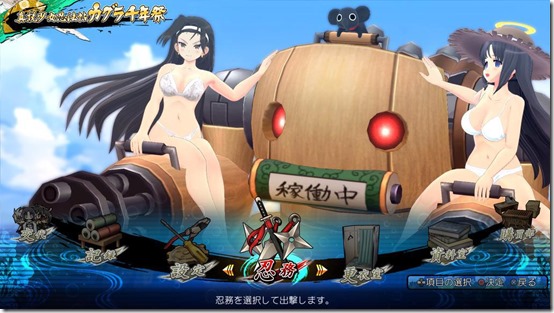 Asuka’s grandma appears in Senran Kagura: Estival Versus, and while she may appear to be frail and old, but she can probably still kick some serious shinobi butt. Series producer Kenichiro Takaki talked on Twitter about the latest update.

Takaki tweeted that the free 1.04 update has action adjustments, and the development team plan on implementing even more changes in the 1.05 update. The biggest feature in 1.04 is the addition of Sayuri, Asuka’s grandma.

Unlike the other characters, Sayuri doesn’t have a Shinobi Tenshin, nor clothing destruction features (which is probably for the best), and her movement speed is slow as a snail, so she’ll be quite difficult to use. A mysterious new “Puppet Walker” mecha has also been added to the game, which you can see in the top image.

The 1.04 update went live earlier today, but Takaki also tweeted about its temporary removal since it was having problems in terms of loading issues. For the time being, he recommends players revert back to 1.03 by not saving their games. For players that have already saved their games and are stuck with the faulty 1.04 version of the latest update, Marvelous will likely upload a fix, soon.

Takaki also previously mentioned that fans will get to look at the updates and details within the game before they launch, so we’ll likely hear more about the 1.05 update in the near future.