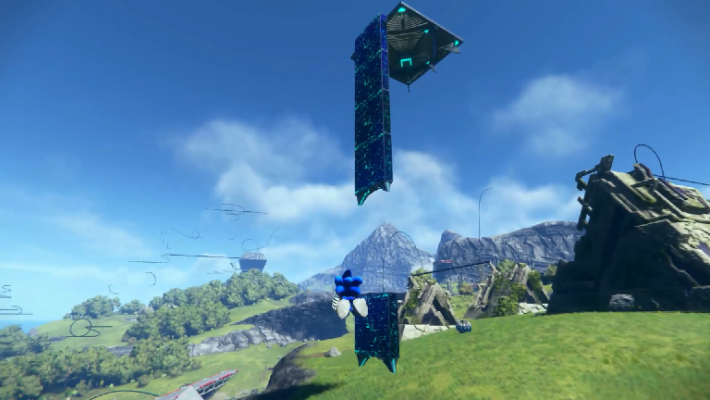 Morio Kishimoto, Director of Sonic Frontiers, has explained in more detail what the Open Zone will mean for the player experience. While it will act in a similar vein to world maps from other platformer games, the Open Zone will also be entirely playable as a level, with stage-like elements. Because the open world itself is like a stage, Sonic Frontiers can maintain its speed for the whole game. [Thanks, IGN!]

World maps in platformers are usually the central hub where players can relax before they enter the next stage. But because the world map is a stage that you can freely explore, the team calls it an Open Zone. This is a combination of “open world” and “Zone,” which is the name for worlds in Sonic. No one had done something quite like this before, which necessitated the team coming up with a new name. Kishimoto states that the Open Zone will be closer to the hub world in Super Mario 64. As well, the game will remain a platformer rather than an open world experience. Players can use platformer elements without the limitations of a stage or course.

However, what defines Sonic the Hedgehog is speed, and Kishimoto states that is what the Open Zone will encourage. Platformers make late-game stages more difficult than the earlier ones as the player becomes more used to the controls. This is also to extend a player’s overall play time. But this can also bog down a player’s “sense of speed,” which is the opposite of what a Sonic game should be. The Open Zone will have a lot of content, so there is no need to increase the difficulty. This means that the Open Zone will have a uniform difficulty level throughout, with new challenges to keep players on their toes.

As Sega showed from past trailers, Sonic Frontiers will have puzzles and combat elements in the Open Zone. The puzzles will be optional for the most part, since the main focus is ultimately on speed. In total, the game should take 20 to 30 hours to complete for the average player. It will take longer for those who want to see everything the game has to offer. There will also be character progression in the forms of levels and a skill tree. You can even level up Sonic’s speed to make him faster.

Sega also debuted a new trailer for the Tokyo Game Show, which you can check out below.

Sonic Frontiers will come out for the PS4, PS5, Xbox One, Xbox Series X, Windows PC, and Nintendo Switch on November 8, 2022.