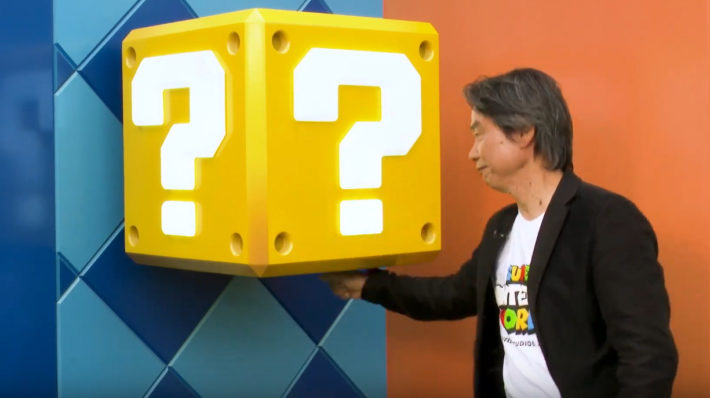 A December 18, 2020 Nintendo Direct detailed some of the features of the Super Nintendo World amusement park that is set to open in February 2021 as part of Universal Studios Japan. The Nintendo Direct was hosted by Mario’s creator, Shigeru Miyamoto, who gave viewers a virtual tour of the Mario-themed location. At the start of the presentation, he emerged from a warp pipe and introduced himself as “Mario’s dad.”

A large, green warp pipe is also how visitors will enter the park. When designing the tunnel-like structure, the team had to have discussions about what the interior of a warp pipe would look like, as is a topic that hasn’t been addressed in the games. The pipe will lead to a room designed to be reminiscent of Peach’s Castle from Super Mario 64, complete with a framed picture of a Bob-omb. In Super Mario 64, this picture serves as a portal to the game’s first level, Bob-omb Battlefield. Like many areas of the park, this room will feature music from the series. The same music that plays in the Super Nintendo World version of Peach’s Castle also plays in the in-game one.

Miyamoto also showed off some of the parks’ interactive elements, which were referred to as activities. Visitors will wear an accessory called a Power-Up Band, which can be synced up to a smartphone through the use of a QR code. Miyamoto went on to say, “They even work like amiibo, so you can use them even after you return home.” When the park opens, visitors will be able to choose from a selection of six Power-Up Bands that feature designs based on Mario, Luigi, Yoshi, Daisy, Peach, and Toad. Interacting with activities will allow visitors to collect items such as coins and keys. Collecting three keys, according to Miyamoto, will grant visitors access to an activity where they battle Bowser Jr.

While Miyamoto kept certain aspects of activities secret, he did demonstrate how some of them will work. Punching blocks, for example, will reward the visitor with digital coins. Another game requires the player to punch a POW Block. If they manage to perform the task with the correct timing, they will launch a moving turtle shell up through a warp pipe, at which point it will collide with a different POW Block. A key will be awarded for successful completion of the task. Secret symbols hidden around the park can be activated by the Power-Up Band as well.

The different areas of the park are adorned with animatronic characters and iconic objects from the games. In particular, the video contained Piranha Plants, spinning coins, and Koopa Troopas. Nintendo mascots will be around the different areas of the park, too. Some of the locations we saw were Mount Beanpole, a maze-like area inspired by underground levels, and Bowser’s Castle. The maze is designed to give the visitor the impression that they are shrinking and Bowser’s Castle will contain things like a Bowser statue and trophies from the Mario Kart series. The trophies are present because Bowser’s Castle will be where the Augmented Reality ride, Mario Kart: Koopa’s Challenge, is located.

Visitors will be able to go to the Super Nintendo World gift shop called the 1-Up Factory, where they will be able to purchase park-exclusive items like the Tokotoko Mario toy. A dining area called Kinopio’s Café will offer food based on the Mario games. Miyamato mentioned Caramel Peach Popcorn, Mushroom-flavored Popcorn, a Mario Burger, and a Super Mushroom Pizza Bowl as examples. The café will have screens mounted to the wall to give the impression that it is operated by Chef Toad and staffed by a kitchen of Toads of different colors. A location similar to these two, called “Mario Café and Store,” was opened in Universal Studios Japan in October, 2020.

Super Nintendo World’s Grand Opening will be February 4, 2021. It was originally meant to open in Summer 2020 but that plan was altered in response to the COVID-19 pandemic. Miyamato mentioned that there are plans to open more Super Nintendo World locations in the future. These plans include locations at Universal Studios amusement parks in Singapore, Hollywood, California, and Orlando, Florida.