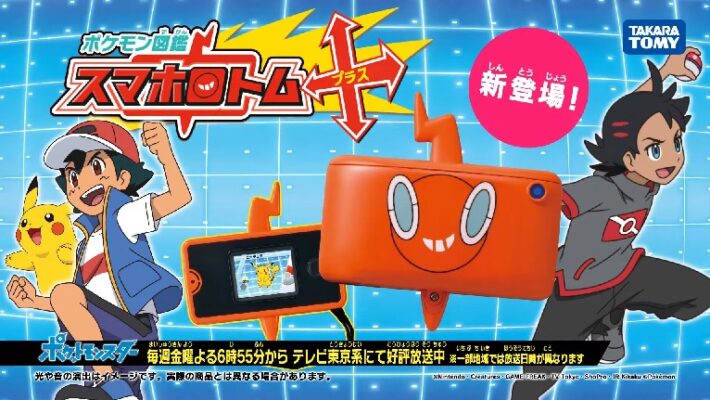 If you ever played Pokemon Sword or Shield and wished for your own Rotom phone, you’re in luck. Takara Tomy plans on releasing a Rotom phone toy in October 2021. It is officially called “Pokedex: Rotom Phone+” and will cost 10,990 yen. That converts to around $100. It will be available from toy stores, department stores, and the official Takara Tomy store. [Thanks, Dengeki Online!]

This is a newer version of the Rotom Phone that came out in July 2020. While it retains the ability to look for Pokemon from all eight regions and scanning them into your Pokedex, it also adds in “body actions.” Body actions allow you to move your body in 24 different ways in order to look for Pokemon, so it’s like you’re on your own adventure. Actions include jumping, spinning, climbing, and balancing.

While it is not a real phone by any means, there is a home screen with numerous apps similar to one. You can use the Rotom Phone+ as a stopwatch, alarm, and calculator. There are also mini-games such as a silhouette quiz for when you’re tired of looking for Pokemon. These functions increase as you gather more Pokemon, so the main focus is still on catching them all. It will also feature characters from the TV series.

Takara Tomy will also launch a series of Gengar capsule toys in late September, wich each roll costing about 300 yen. These toys feature Gengar in various poses and even in his Gigantamax form.

The Pokemon Sword and Shield Rotom Phone+ toy from Takara Tomy will come out in October 2021 for 10,990 yen.