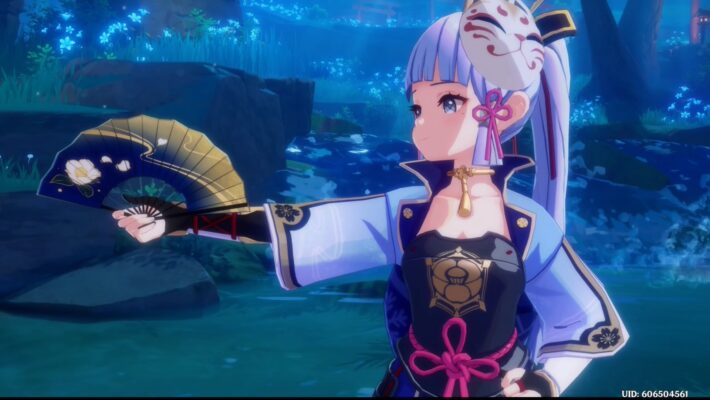 In Genshin Impact, the first acts of the Ayaka and Yoimiya story quests aren’t optional. Both Gru Nivis’ The Whispers of the Crane and the White Rabbit and Carassius Auratus’ Dreamlike Timelessness need to be completed to take part in Chapter II Act II: Stillness, the Sublimation of Shadow. But while both stories share a character-based focus and requirement, there’s something else they have in common. Each one involves the player getting a better sense of the duty each woman holds herself accountable to and the role she plays in Inazuma.

There will be some minor spoilers for the Genshin Impact first chapters of the Ayaka and Yoimiya story quests below.

Each one goes about it in different ways, which is commendable. It isn’t as though each story quest has us shadowing Ayaka or Yoimiya as they do engage in their daily job as a leader of the Yashiro Commission and Naganohara Fireworks owner. (Though there are shades of this in Yoimiya’s first chapter.) Rather, through their own insights and interactions with the community, Genshin Impact shows us how they see their positions and the standards Ayaka and Yoimiya feel like they must maintain. 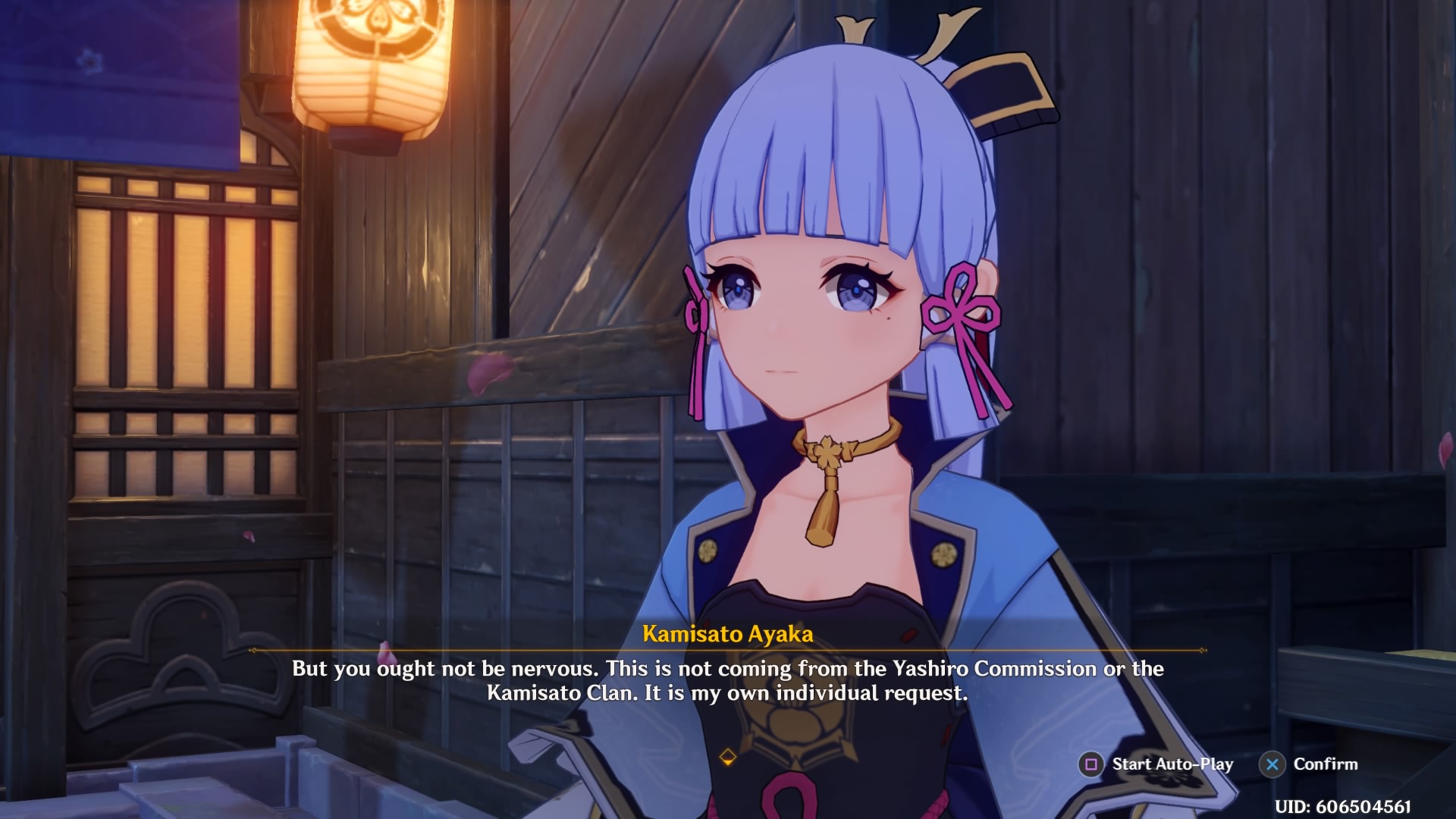 In the case of the first chapter of the Ayaka story quest, ambiance is used to offer us a better idea of who she is, what she goes through, and the duties she must uphold. Ayaka learns about a friend her late mother had. She asks the player to help her prepare a gift for, and then meet with, this mystery woman. While this is a casual request on her personal time, her professional life bleeds into it. As she meets with vendors to prepare different elements of the present, the clerks we speak with and folks we encounter share how dignified she is. We also see how devoted she is to maintaining her role and duties. But, at the same time, we see how this sets her apart. When you reach Kiminami Restaurant, you find out how alone she is and the sacrifices that come from being the head of one of Inazuma’s three commissions. While Ayaka is doing everything for the community, at the same time her role forces her to be detached from it.

The Yoimiya story quest, on the other hand, couldn’t be more different. The first chapter of hers essentially is a day in the life of the fireworks creator. Which involves spending more time not making the explosives than doing so. We see exactly how integral she is to the community, as she gets involved with people professionally and personally. We also see the commitment the Naganohara has to their customers, from remembering firework formulas to aiding them with their troubles even when they might not be buying anything. She’s constantly immersing herself in people’s lives, seeing it as her duty as a member of the community and extolling the importance of the memories her family’s creations can help create. 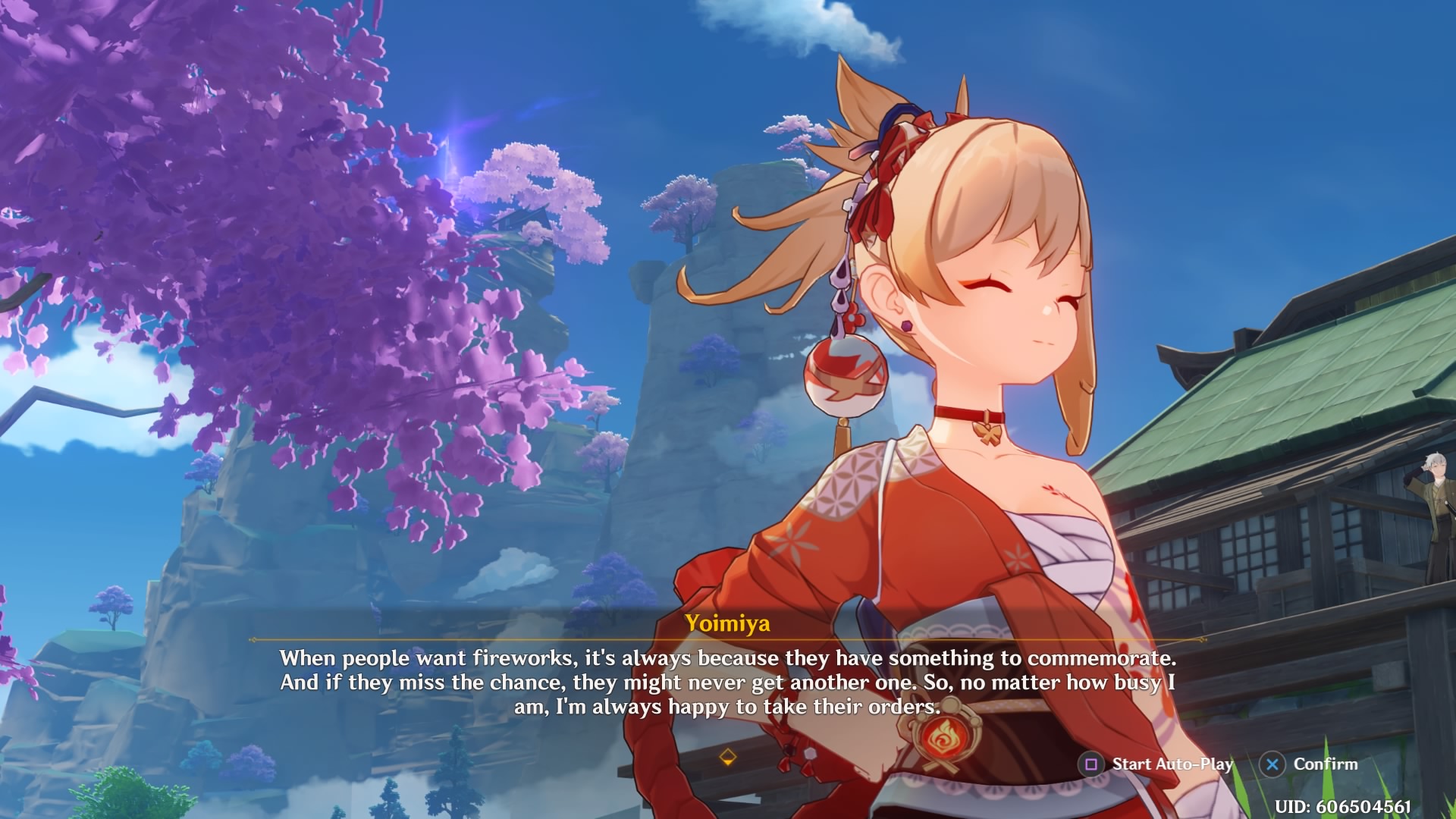 And the juxtaposition of these Ayaka and Yoimiya story quests in Genshin Impact provide a perfect example of how alike, but different, these women can be. Each one is devoted to the community. They want to make Inazuma a better place. But their roles mean very different experiences for each one. For Ayaka, that means being respected and put on a pedestal, with the leader setting herself apart to be an example and follow proper procedure. In Yoimiya’s case, it means completely diving in and becoming totally invested in the lives of everyone she meets. Each one is embraced by the people of Inazuma in their own way, but the pairing shows how striking things can be. (A fact also helped by the difference in personalities, opposing Cryo and Pyro visions, and social class as well.)

The result are a pair of Genshin Impact story quests that not only help us get to know Ayaka and Yoimiya better. They help us understand Inazuma’s community and culture as well. We get a better idea of what each is going through and why each one’s personal sense of duty means each they are so dedicated to the rebellion. As both play rather large roles in these early Inazuma Archon Quests, it benefits the story and game as a whole.