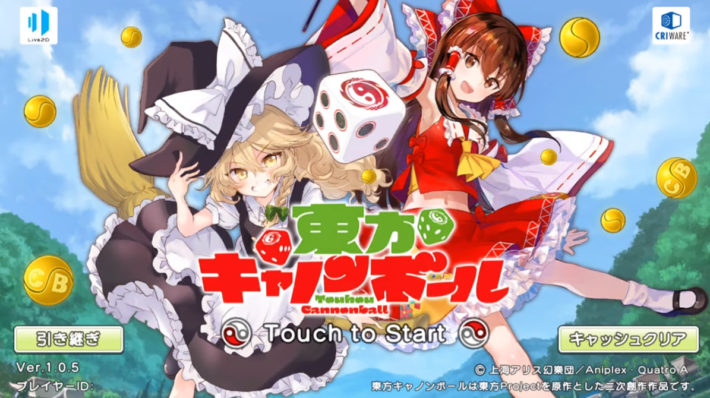 All things must come to an end, and the same goes for Touhou Cannonball, the smartphone Touhou fangame that launched last year in Japan. The claim to fame for Touhou Cannonball was that it was the first officially available Touhou-based gacha game, and had the blessing of series creator ZUN. However, it seems that the spell is about to end, as Touhou Cannonball will end service on October 14, 2020.

The game officially ends service at 2pm JST on October 14, 2020, in just a month. The team behind the game apologized for the sudden notice, as well as the fact that the game had to end service. As of this week, paid currency has already been made unpurcheasable, although players are still able to use any remaining paid currency in possession. From October 14 to December 15, 2020, refunds will be given out to any players who require them.

Touhou Cannonball is a fangame that features board game-style gameplay, with players sending out parties of Gensokyo characters like Reimu Hakurei and Marisa Kirisame onto a party game-esque board, where players need to collect symbols, face off against CPU characters, and head to the goal to win. How gacha fit into this was how characters could provide bonus score to your board game gameplay, and also act as items that could help influence dice rolls, and more. There are also combat-focused raid battles against various characters, so there is still essence of the main Touhou games in the game.

Since Touhou Cannonball‘s debut, another smartphone Touhou fangame called Touhou: Lost Word also launched. This title is closer to what you expect from a combat-focused series like Touhou, being a card-based RPG where you pit three of your favorite characters (and their spell cards) against three enemies. There’s even a nifty feature where you can decide which voice actress out of three voices each particular character, as the characters have no official voices in the main games. This means that there are still ways for fans to get their Touhou fix on smartphones if they still want to.

Touhou Cannonball is available on iOS and Android in Japan. The game will end service on October 14, 2020.