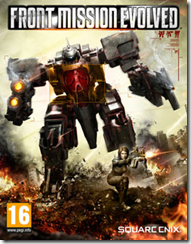 Before we get to that point I asked Koichi Sakamoto, who has been working with the Front Mission series, why Square Enix turned their mecha strategy RPG series into a shooter.

“Looking globally, we thought about what franchise could have worldwide appeal. Shooters are popular and Front Mission’s theme of war was suitable for a shooter, so we thought it was a perfect fit,” Sakamoto replied. Mecha shooting games, while uncommon in North America, are quite popular in Japan. Namco Bandai’s portable Gundam vs. Gundam games are usually hot sellers.

“We purposely didn’t number this game,” Shinji Hashimoto, Producer, explained. “We are aware there are plenty of Front Mission fans out there that like simulation games. There is definitely a possibility that the series will return to a tactical game in the future. We wanted to leave that open ended. It all depends on how consumers react to this title [Front Mission Evolved].