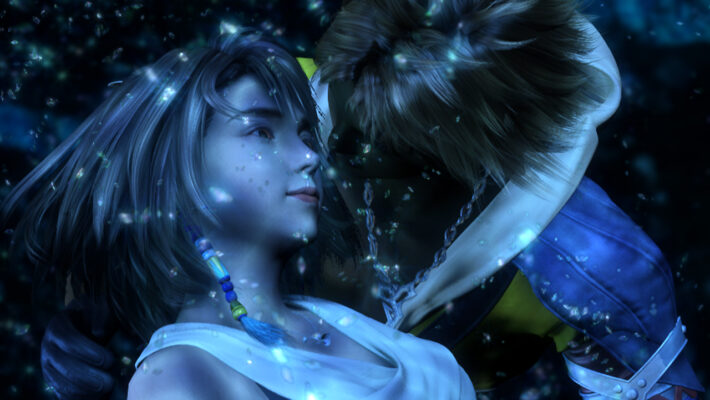 “The people and the friends that we have lost, or the dreams that have faded…Never forget them.”

20 years ago, Final Fantasy X released in Japan. The game offered a neat battle system, a compelling leveling system that let you get creative with how you composed your characters, and a new twist on summons. That stuff was all wonderful, but what made the game so enduring is its touching story, and the heartwarming, heartbreaking connection between Tidus and Yuna. In a lifetime of playing games, I’ve rarely been touched by a story as much as theirs, or been so affected by an ending.

Editor’s Note: There will be spoilers for Final Fantasy X in this article.

Tidus, lost and adrift after finding himself mysteriously cast out of his homeland, Zanarkand, finds himself following Yuna, a Summoner, and her Guardians. Yuna is on a mission to rid the world of Sin, gathering Aeons so that she can fight back against the colossal monstrosity that threatens the world of Spira. Killing Sin only buys the world a little bit of time before the beast returns, though. That’s assuming the Summoner pulls things off. And even if they do, we’ll eventually find out that there’s a terrible price to pay.

Yuna knows all of this going in. She knows where the journey ends, and how many friends will die if she fails. She also knows that she will die if she succeeds, and another of her closest loved ones will become the new Sin. She’s carrying a terrible weight with her throughout her travels, as are all of her friends. Because of this, Final Fantasy X seems like it should have been a grim, bleak game. The Guardians and Summoner all know the awful end to this tale. 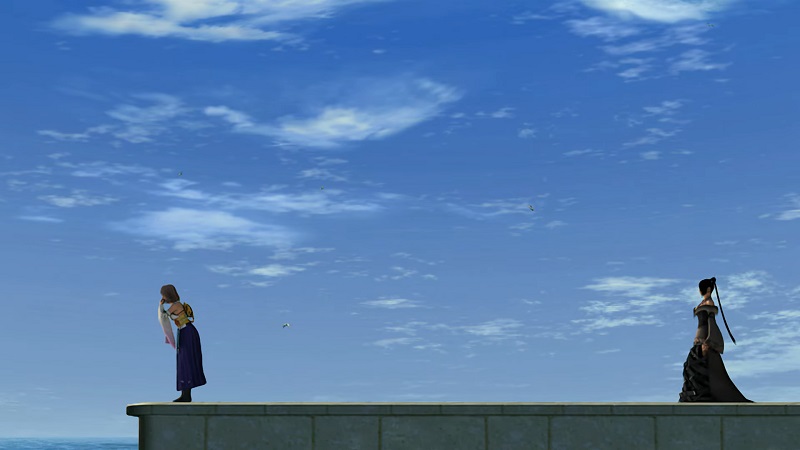 Tidus has his own issues, too. His father, Jecht, has been missing (and he wasn’t too charming while he was around). As it turns out, his father has become Sin, something that Tidus learns quite early on, but has trouble accepting. As he gains more knowledge of things, he learns that, if Yuna and the gang can kill Sin and deal with its source, he’ll fade away as well. Everyone seems to be marching toward their own death for much of Final Fantasy X.

There is this cloud of sadness that should completely cover the events of this game, as if everyone within it is suffering from a terminal illness. Death is all that awaits them at the end, in some shape or form. Even so, there is so much light, fun, and care between Tidus and Yuna throughout the game. It starts off with little glances here and there. Yuna seeming to smile at Tidus at Kilika Temple. The playful teasing over Tidus screaming in frustration earlier. Teaching her how to whistle. Their connection is a bright light against the darkness that overlays everything.

Take what may be the most infamous scene in the 20 years since Final Fantasy X released. a moment where Yuna tries to help Tidus cheer up after talking with Auron about how his father is Sin. Here, we not only see Yuna perfecting the whistle Tidus taught her (itself a funny scene between the two), but she encourages him to smile to get through his pain. Why? Because it’s how she gets through her own.

“…summoners and their guardians are kind of like Spira’s ray of light. A lot of people in Spira depend on us. I learned to practice smiling when I’m feeling sad, you know?” she says. 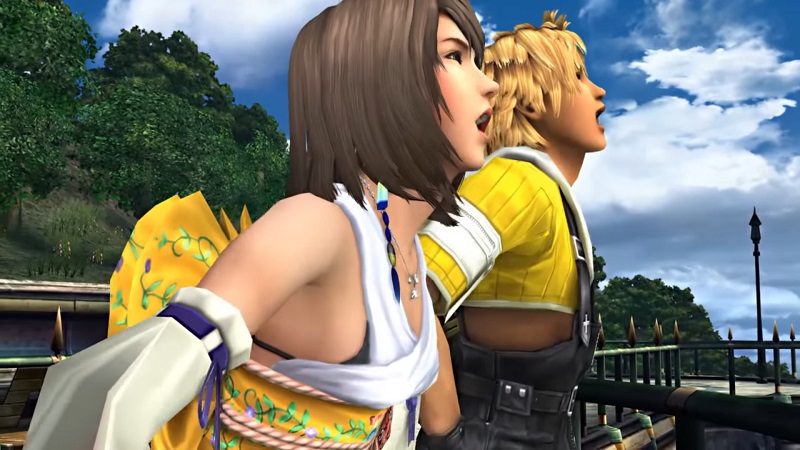 At this, she prods him to try to make himself smile, which doesn’t work well, then try to force himself to laugh. What comes out is this absurd forced laughter which she eventually joins in on. The ridiculousness of it all ends with them both genuinely laughing, breaking the gloom around Tidus, and shaking up some of the darkness around the party.

Like Tidus playfully teaching her to whistle, telling her that “Use that if we get separated. Then…I’ll come running!” Watching Tidus try to talk around the fingers in his mouth, while Yuna does the same, dispels the bleak cloud that hangs over much of Final Fantasy X. While you may not know the full extent of how bad things will get at this point in the game, it’s these moments that I kept thinking back to as the journey continued.

When he learns where the road is headed, Tidus suggests that Yuna throw it all away in a quiet moment at Macalania Spring. Come to Zanarkand and enjoy herself and her life, rather than die as a Summoner. While these two bring a joy that permeates Final Fantasy X, their story is also about how their hearts bind them to the people they care about.

For Yuna, she has a world to care for, regardless of what she wants. For Tidus, that means he’ll follow her wherever she goes, which he eventually learns will lead to his own end. 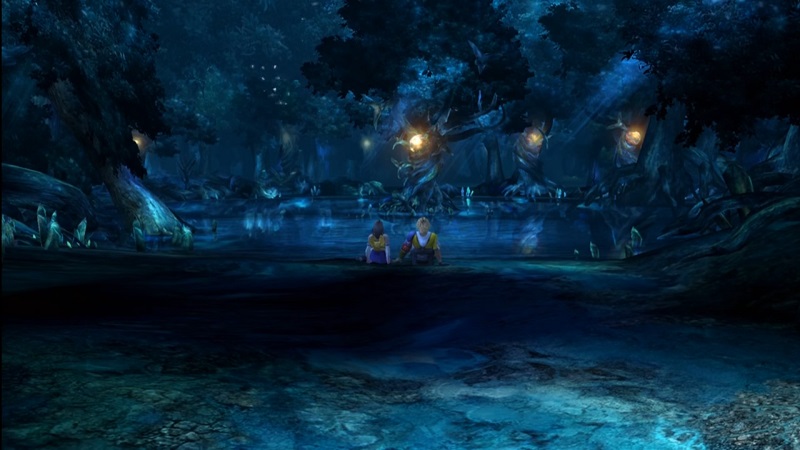 Their relationship is so touching because the two of them always seem so quick to bring the other up out of the darkness of what’s to come. When one falters, the other is right there to take care of them. As the player, we also know we are heading toward death, even if we succeed. It’s there in the back of our minds for much of the game, but Tidus and Yuna shine with such light in moments like these that we forget, just for a little while. Or maybe a part of us feels that finding this kind of care and love for another person, even if it’s just for a brief moment, is worth it.

It’s a held hand at Macalania Woods, just before they march off toward their own doom. It’s tenderness against a harsh world. Connection when we are facing oblivion together.

Maybe we feel that these moments are radiant in their brevity. That we’re all on our own short adventures, and finding someone who can make us forget the gloom and laugh, even just a little, is something truly beautiful. That these moments of stolen joy are so utterly precious in our own lives. 20 years later, Final Fantasy X still reminds us to treasure these times when we find them through our journey with Tidus and Yuna. It’s those small moments of caring that make them such a heartwarming couple, and their sincerity why the game continues to affect me as much now as it did two decades ago. Hopefully the potential Final Fantasy X-3 can, in some way, touch on these themes with such grace as well.

“Stay with me until the end. Please.”