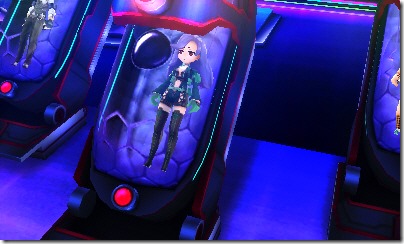 7th Dragon III Code: VFD eventually has players creating a party of characters from eight different classes, then sending them across time to deal damage to dragons in multiple dimensions. Except, you don’t have access to all eight classes at the outset. The Nintendo 3DS game gradually doles them out, letting you get comfortable with certain people before giving you a full crew. The first four you’re able to use are the Agent, Duelist, God-Hand, and Samurai. While they aren’t all typical JRPG classes, these folks are exactly the team you need at the outset of your adventure. Each one could have two possible builds that offer a different service in battle.

Let’s start with the Samurai, which is probably the most traditional character in the group. This is a warrior that wields a single longsword or dual blades. The moveset varies accordingly. Someone with a Samurai on their team has to decide right away which kind of character they want him or her to be. I recommend going the dual blades route, mainly because my Samurai went on to be the leader of my second team. I needed someone adept at crowd control and capable of caring for himself if the lower level allies fell. So, he has dual blades set and, at this point in the game, I’ve had him max out his Cyclone Dance, Poplar Admiral, and Maple Tear attacks. Cyclone Dance, when maxed, deals 14 random hits to all enemies. Maple Tear is handy, as it imbues all of the Samurai’s attacks with fire and burns an enemy. Poplar Admiral has no status effect bonuses, but does a ridiculous amount of damage.

This isn’t to say a Samurai with a longsword is less desirable. This version of the character would fill a very different position. He or she would be designed to inflict high amounts of damage on a single enemy, though there is an unsheathed Whirlwind attack that hits multiple enemies randomly. This version requires you to be very aware of the sword’s state, since some skills are only available when it is sheathed or unsheathed. This is a good character for handling dragons in a capable group, not so much for general exploring. 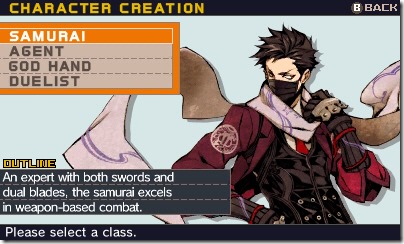 The other 7th Dragon III Code: VFD Samurai skills to invest in are ones that will buff and better that character. Maxing Invigorate is a must, since it will both heal and cure the Samurai. I also like the Fighting Spirit and Blade of Rage automatic skills, as the former might trigger a hit when a battle begins, while the later attacks an enemy if one of your allies dies that round in battle. Aside from that, Red Flame Exhale and Black Steel Inhale are solid choices, as one increases attack at a turn’s end for 10 turns, while the other increases defense at a turn’s end for 10 turns. With these automatic skills, a Samurai can survive a High Dragon battle even when allies are dead.

As cool as the Samurai sounds, 7th Dragon III Code: VFD’s God-Hand is my favorite character. So much so, I’ve doubled up on the class. (Eventually, you have three parties of three characters. Since there are only eight classes, you have one double.) This character is the closest thing you have to a medic early on, though it’s primarily a pugilist. Chiropractic can heal varying amounts of life force, depending on how many skill points you’ve invested into it. Detox cures ailments, with its range increasing as its level rises. CPR revives a fallen ally, with more health given as its power increases. Someone could make a God-Hand a healer first and foremost, with one or two attacks to pick up the slack.

Making a straightforward attacker is another option and what I did with my God-Hands, working on their attacks, stances, and automatic abilities. Start with maxing Jab, an attack that hits the second a battle begins and inflicts between 1 and 2 God Depth on an enemy. Ideally, you want Jab, Double Hook, Spinning Edge, and Coup De Grace maxed. The following three attacks require varying degrees of God Depth and involve dealing damage and offering some additional effect. Double Hook can only be used on an enemy with at least 2G and decreases physical and magical attack strength. Spinning Edge requires 2G as well and decreases physical and magical defense. Coup De Grace is most helpful, as it can deal at least 500 damage and restore a couple hundred health to the God-Hand. 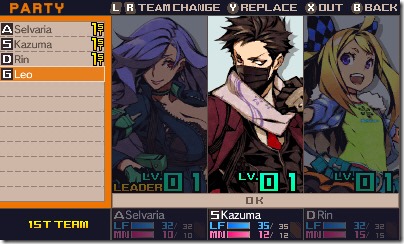 God-Hand’s supplemental skills are great too. Ambush Stance is great for battles with multiple enemies. Any time the God-Hand takes damage, they’ll return damage and inflict God Depth. It also increases enmity, so enemies will attack them more than other party members. Stardust Press is an automatic counter, Final Flame will give a chance at surviving an attack that would normally kill a God-Hand, and Pre-emptive God will occasionally inflict damage and 1G to all enemies when a battle starts. Like the Samurai, the God-Hand is a character that doesn’t need allies to win a battle.

The Agent and Duelist are more susceptible characters, but also each have two roles they can play. While it’s easy to go ahead and call the God-Hand a default healer, the Agent could be your real healer. He or she just happens to need items to do so. The character can Hide during a battle, greatly decreasing enmity, increasing evasion and critical likeliness, and allowing the use of certain hidden skills. One of which is Trick Hand, which increases the effects of healing items for a certain number of turns. The character can also Withdraw, which almost always guarantees an escape from battle. My favorite Hide skill is Bush Trap, which damages an enemy and maybe nulls action on an enemy when they attack the party. Combine Bush Trap with Assassin’s React, which has a chance of giving an additional turn after a critical hit is inflicted, and the Agent gets even more speedy assaults.

If you aren’t making an Agent an unseen ally healing and dealing quick attacks, you could use Hack constantly to attack and debuff enemies in 7th Dragon III Code: VFD. Quick Hack, an automatic skill that might trigger at a battle’s start and hack all enemies, is a godsend, though the standard Hack is equally amazing. This is an ability that can work on standard enemies and dragons alike. Once a creature is hacked for two turns, you have an opportunity to deal damage, lower stats, restore your own party’s mana points, put them to sleep, or make them fight amongst themselves. I recommend maxing out lostpower.exe first, as it’s the one that deals an extraordinary amount of damage and lowers every stat for four turns. It’s incredible and useful in every situation. Get scapegoat.exe too, as it’s essential for longer battles. It inflicts damage while restoring MN. I recommend having an Agent in the same group as a God-Hand, Duelist, or Mage, since all three go through MN quickly. 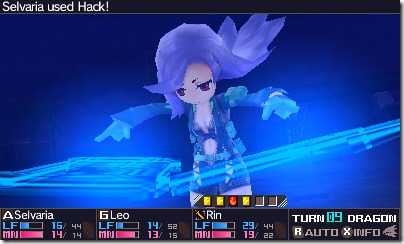 The Duelist is a tricky sort of character and one a 7th Dragon III Code: VFD player may want to double up on. One build could make it into a makeshift mage, while the other will spend battles setting up traps. I prefer the latter, since traps are incredible for dragon battles. (Each dragon gets to attack twice. Attacking a Duelist with traps set triggers amazing amounts of damage each time.) You’ll want to start by putting a few points into Pitfall, Barbed Wire, and Fire Whirl to start, then gradually max each one out. Pitfall is triggered by any kind of attack that hits the Duelist, deals damage, and might null action on an enemy. Barbed Wire is only triggered by physical attacks, deals damage, and might inflict Bleed on an opponent. Fire Whirl’s activated by magic attacks, deals damage, and could Blind the attacker. Learning the Judgement automatic skill makes all traps trigger at once after any kind of attack. It’s the best, and I’ve seen it inflict at least 1,000 points of damage against even High Dragons.

The other kind of Duelist is a mage. He or she uses the fire, ice, and lightning cards to summon a monster that deals the damage tied to it with Summon: Fire, Ice, and Lightning attacks. The strength is determined by the number of those cards the Duelist has in his or her hands. Supply Draw is a helpful skill for this character, as it takes a turn to add random cards to the character’s hand. Otherwise, you only start a battle with two cards and add one each turn. The Field skills are handy too, as Field: Volcano, Field: Storm Cloud, and Field: Glacier use two cards from their element to deal damage to all enemies and reduce all of their resistance to one element. If you want to focus on a Fire, Ice, or Lightning Duelist, then learning the Search: Fire, Search: Ice, and Search: Lightning skills are great for only getting some of those cards. Though honestly, I recommend maxing out Supply Draw over the more specialized abilities.

While all of the 7th Dragon III Code: VFD classes are great, these four classes are the most well rounded. If someone really wanted to, they could probably beat the game with varying builds of these characters. Not that you should, but it is possible. Even now, my two favorite teams in the game consist of a God-Hand, Duelist, and Fortuner as my primary force and a Samurai, Agent, and Banisher as my second string. (My other God-Hand, Rune Knight, and Mage round out this Unit 13.) There’s a lot of versatility here, which makes dungeon-crawling more enjoyable.